As predicted, LAX had an incredible year for cargo operations in 2021, shattering prior records as our role in the global supply chain gained new importance. LAX cargo totaled 2,974,073 tons last year representing a 20.64% increase in calendar year 2021 as compared to calendar year 2020, which was already our busiest year on record. Freight volumes increased by 22.3%, while mail volumes actually decreased by 7.95%. Domestic cargo increased by 18.4%, while international cargo increased by 22% over last year. Federal Express continues to be the dominant airfreight carrier at LAX, accounting for 12.65% of total freight cargo, followed by Kalitta Air LLC with 10.12%. Kalitta also continued as the top mail carrier accounting for 41.81% of total mail cargo.

LAX Air Cargo (in US Tons) 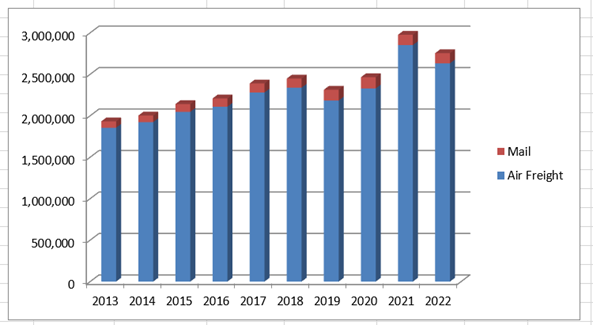 
Los Angeles US Customs District Continues to be Ranked #1

Los Angeles International Airport is a key transportation center for one of the world’s most dynamic economies. In 2020, the Los Angeles U.S. Customs District again ranked #1 among the nation’s 46 districts with two-way international trade valued at $428.23 billion. LAX alone was responsible for over $118 billion in exports and imports. See LA Trade Numbers for more information.

The Southern California region accounts for a majority of the state’s multi-billion dollars in international trade. Many of the largest industrial companies headquartered in the state are located in the greater Los Angeles area. Los Angeles is a leading high-technology center for the nation in the entertainment, electronics, biomedical, computers, and aerospace industries.

The convenience and efficiency of LAX as a major distribution center for air cargo is supported by the ready availability of vital allied services, especially for Pacific Rim traders. The LA-area cargo trade also engages more than 800 freight forwarders and 360 customs house brokers, who are in the LA area to expedite the region’s air cargo delivery. U.S. banks with international operations have offices in Los Angeles, as do foreign banking institutions.

If you have any questions related to cargo operations at LAX, please feel free to email us at cargo@lawa.org.