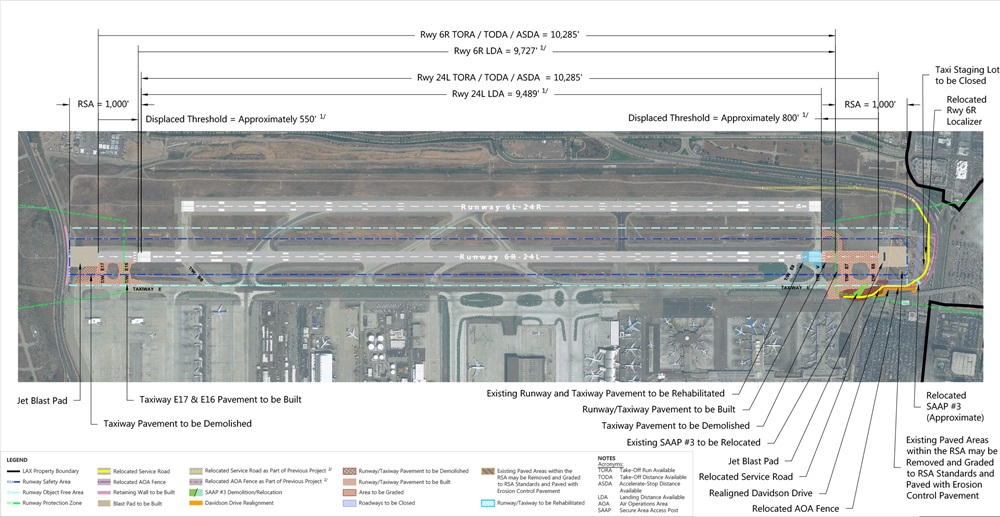 Runway Safety Areas (RSA) are defined surfaces surrounding the runway prepared or suitable for reducing the risk of damage to airplanes in the event of undershoot, overshoot, or excursion from the runway. Currently, neither Runway 6L-24R nor Runway 6R-24L complies with the FAA RSA design standard of 1,000 feet from each end.

LAWA, proposes to construct improvements to the RSA for Runway 6R-24L at LAX. These improvements are being proposed in order to comply with the requirements of the Transportation, Treasury, Housing and Urban Development, the Judiciary, the District of Columbia, and Independent Agencies Appropriations Act, 2006 (Public Law [P.L.] 109-115). This Act requires completion of RSA improvements by airport sponsors that hold a certificate under Title 14, Code of Federal Regulations (CFR), Part 139, Certification and Operations: Land Airports Serving Certain Air Carriers, to comply with Federal Aviation Administration (FAA) design standards by December 31, 2015.

The proposed Project would not result in increased or decreased aviation activity at LAX compared to existing conditions, and would not increase runway length or move either runway to the north


All airfield projects require federal and local approval and environmental clearance as dictated by the California Environmental Quality Act (CEQA) and the National Environmental Policy Act (NEPA). In order to improve the RSAs for both runway and comply with the December 31, 2015 federally mandated deadline, both CEQA and NEPA processes are underway simultaneously.

Comments should be sent to: