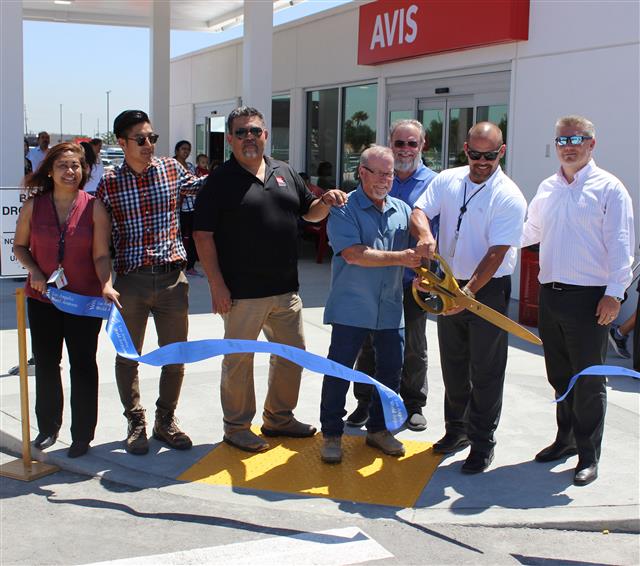 Project managers and other key staff cut the ribbon at the new Avis location on Wednesday afternoon.

(Los Angeles, CA) – Los Angeles World Airports (LAWA) successfully completed the on-schedule relocation of Avis Rental Car operations from Airport Boulevard to its new temporary home off Westchester Parkway. The new location opened in the early hours of Aug. 20 and a ribbon-cutting ceremony was held today to celebrate the milestone. The relocation was needed to give the Intermodal Transportation Facility – West (ITF-West), a major component of the Los Angeles International Airport (LAX) Landside Access Modernization Program (LAMP), the full site area to begin construction on the approximately 4,500-stall parking structure.

“The transformation of LAX is made up of a multitude of smaller projects, each which allows the next to move forward,” said Bernardo Gogna, Chief Development Officer, LAWA. “By moving Avis Rental Car operations to their new location, we are one step closer to the 2021 projected opening of the Intermodal Transportation Facility – West and providing a new parking and riding option for airport guests.”

The relocation project began in 2018 and involved several complicated phases to complete the move of Avis' busiest location in the world. LAWA’s contractor, Myers & Sons - Griffith, A Joint Venture (MGJV), secured new modular buildings for Avis’ new location and was also tasked with building a new intersection to allow access to the new facility. The construction of the intersection at Westchester Parkway and the new Jetway Boulevard was also completed in conjunction with the Avis relocation and was an integral component in completing the project – as direct access for Avis’ customers was required. In total, approximately 800 feet of Jetway Boulevard was completed allowing the needed access for Avis. The remaining portion of the new roadway, which will connect Westchester Parkway to Century Boulevard, will be completed in 2023.

The project also entailed repurposing a portion of Lot C for Avis' operations. The work included relocating the Avis employee parking lot, adding a new driveway on Airport Boulevard, abandoning the north side of Jenny Street and changing it into a visitors parking lot. The project also added a new Zipcar lot, added new booths, an exit plaza and a bus entrance on Jetway Boulevard.

Avis rental car operations will utilize the new facility until the Consolidated Rent-A-Car (ConRAC) facility is completed in 2023. Then, operations will move into the ConRAC and connect customers to LAX via the Automated People Mover train system. 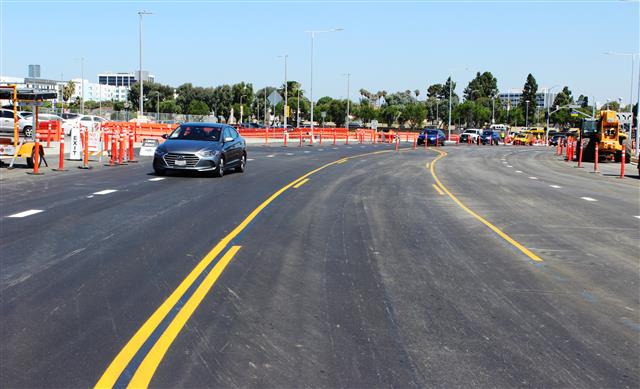 An 800-foot section of Jetway Boulevard has opened, providing access to the new Avis location.