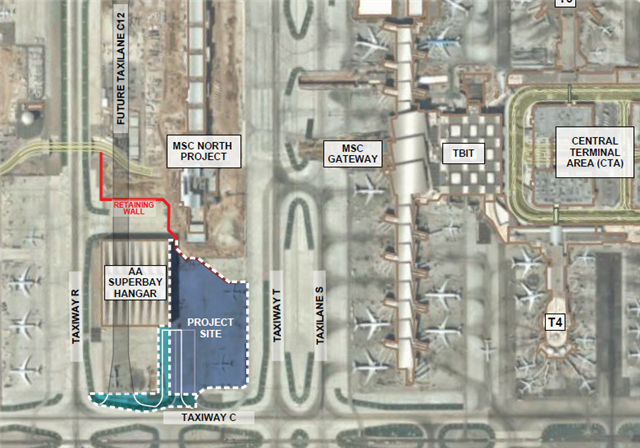 A map of the site for the proposed MSC South shows its location relative to the MSC North and the American Airlines Superbay Hangar.

(Los Angeles, CA) The Los Angeles Board of Airport Commissioners (BOAC) voted unanimously Thursday to select Woods Bagot for design services for the proposed Midfield Satellite Concourse (MSC) South. The value of the contract is up to $12 million.

The MSC South will be an eight-gate complex connected to the MSC North, which is currently under construction on the airfield west of the Tom Bradley International Terminal at Los Angeles International Airport (LAX).

“The MSC South project will economically deliver new domestic contact gates that provide our guests with a significantly improved experience and allow them to take advantage of our recent investments at Tom Bradley International Terminal and MSC North," said Hans Thilenius, Deputy Executive Director for the Terminal Development Improvement Program, Los Angeles World Airports. “We intend to use pre-engineered structural systems, which will aid in building these gates expeditiously and without significant impact to our operations.”

The MSC South will be a two-story, pre-engineered structure providing eight gates that can serve Group III aircraft, such as the Boeing 737 and Airbus 320 family. The new concourse will provide additional domestic gates that further reduce reliance on remote gates allow guests using the facility to access concessions, services and lounge areas at Tom Bradley and the new MSC North. The MSC North is currently under construction and expected to open next summer with 12 new gates.

The Woods Bagot team demonstrated a wealth of experience and creativity in their technical proposal, according to a report LAWA officials prepared for the BOAC. Woods Bagot is is a global architectural firm with offices in San Francisco, London, Singapore, Dubai, Sydney, and Abu Dhabi among others. It has designed a number of airport projects, including the recently opened Harvey Milk Terminal 1 at San Francisco International Airport. At LAX, Woods Bagot served as the lead architect/designer for the Joint Business Lounge in TBIT shared by Qantas, Cathay Pacific, and British Airways.

A program-level analysis of the planned southerly extension of the MSC was included in an Environmental Impact Report approved by BOAC in July 2014. The target construction schedule is from 2020-2022 with a target operational date of early 2023. Current plans call for the facility to be built to LEED silver standards.