LAX Celebrates K-9 Partners for 'Work Like a Dog Day' 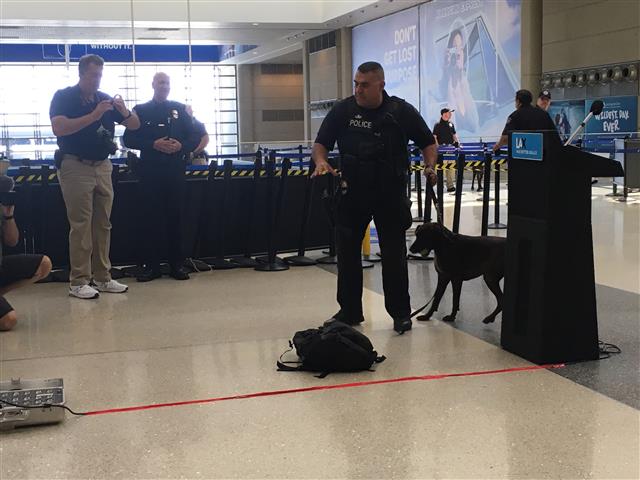 Los Angeles Airport Police Officer Robert Corchado demonstrates how his working canine Mali, a chocolate labrador, detects and alerts for a potentially suspicious item at the Tom Bradley International Terminal on Monday as part of a demonstration.

(Los Angeles, CA) Los Angeles International Airport (LAX) celebrated some of the hardest working noses in the business as part of national "Work Like A Dog Day," with demonstrations and a class photo featuring canines from Los Angeles Airport Police (APD), the Transportation Security Administration (TSA) and U.S. Customs and Border Protection (CBP). A total of nine dogs showed off their skills at Tom Bradley International Terminal, demonstrating various detection and training techniques with their handlers.

"Los Angeles International Airport is one of the most dynamic environments in the country, requiring an equally dynamic law-enforcement program with multiple specializations across a very diverse campus,” said David Maggard, Deputy Executive Director for Law Enforcement and Homeland Security, LAWA. "Our airport police canines and officers use special training and tactics to help identify potential threats from the curb to the gate, inspect international cargo and serve as a force multiplier to our public safety efforts.”

LAX has the largest aviation police force of any U.S. airport, and also deploys the largest explosive detection unit in the country, which includes a significant number of K-9 teams that are used across the airport. APD also has canines trained in suspect apprehension. TSA deploys its own explosive detection K-9 teams at LAX at the security screening checkpoints in a variety of capacities, including the agency's real-time threat assessment program, which enhances the efficiency of the security screening process. In 1984, LAX became the first airport to host CBP's famed "Beagle Brigade," which uses the pups to inspect international arrivals for prohibited agricultural items.

Together, these canines, which come in a variety of breeds and sizes, are protecting tens of millions of passengers each year by cooperating in a multi-layered approach to airport security.

“Passenger Screening Canines and their handlers play an important role in the efficiency of the security operations at LAX,” said Keith Jeffries, TSA Federal Security Director at LAX. “They not only have expert skills in detecting the presence of explosives, they are one of our most visible layers of security, and a passenger favorite as well.”

Both TSA and APD canines receive extensive and specialized training at Lackland Air Force Base in San Antonio, Texas. As part of a 12-week program, each dog is carefully screened and exposed to hundreds of explosive odors. Handlers learn about canine psychology in order to improve their interactions as they learn to read each dog's actions.

The TSA National Explosives Detection Canine Team Program has played an integral role in protecting the nation’s transportation systems since 1972, when the Federal Aviation Administration (FAA) first started the program. TSA assumed program responsibilities in 2002, and it remains a vital component of airport security programs across the country.

In 2011, TSA expanded the program by deploying Passenger Screening Canine (PSC) teams. These teams are composed of a Transportation Security Inspector and a canine trained to detect explosives carried or worn by a person. The teams now operate at airports across the country, including at LAX, working to detect explosive odors at checkpoints and in both the sterile and public areas of airports. PSC teams were part of today's demonstration, and can be found in all nine of LAX's terminals.

CBP at LAX utilizes beagles to defend the front line of the nation's agricultural health, using their keen sense of smell to detect foreign items and tainted goods. Should someone unwittingly attempt to import items like diseased fruit or other foods, CBP's canines can sniff them out from across a room. You'll find them working in CBP inspection areas located throughout LAX.

“The Beagle Brigade program at LAX is extremely effective in detecting foreign prohibited food items, invasive weed seeds and insects, and plant and animal diseases that pose a significant threat to U.S. agricultural industries and our nation’s economy,” said Donald R. Kusser, CBP Port Director of Los Angeles International Airport. “They are the preferred breed of dog at the airport because of their keen sense of smell, non-threatening size, high food drive and gentle disposition with the public.”

Video highlights from the event can be viewed here. 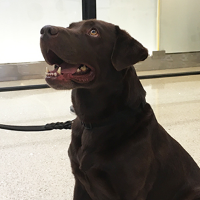 Bang is a 7-year-old English Chocolate Labrador. She has been working at LAX with her handler, APD Officer Torres, since 2014. While her work focuses on detecting explosives with APD, Rito enjoys playing with her favorite tennis ball, and is an avid swimmer. You can find her patrolling all of LAX keeping travelers safe. 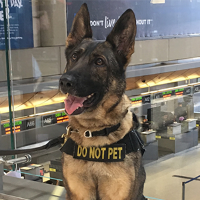 Roxy is a 4-year-old German Shepherd. She has been working at LAX with her handler TSA Officer Barrientos since 2017. She is an original: the first and only “pointy-eared” TSA Passenger Screening Canine assigned to LAX. Roxy loves to work and wakes up at 3 a.m. every day, sitting by the front door ready to go, even on her days off. When she is at home, she likes to watch TV or hike the hills and chase butterflies. 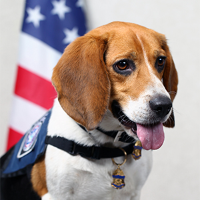 Seeker is a 7-year-old Beagle-Basset mix. He has been working at LAX with his handler, CBP Officer Bongolan. He takes great pride in his work with CPB, which is protecting American agriculture. When he's not looking for suspicious smells during work hours, Seeker can be found scratching an itch against boxes for fun.