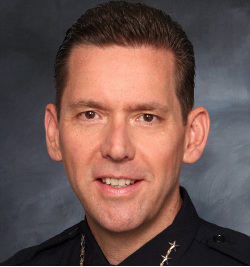 “The safety and security of our airports and surrounding community is the foundation of all that we do at Los Angeles World Airports,” said Deborah Flint, CEO, LAWA. “As we transform our airports and operate in an ever more complex environment, we need leadership that can anticipate and adapt to innovations and emerging threats in the security landscape. David L. Maggard has the strategic, forward-thinking vision that we need at this critical time for LAX and Van Nuys airports.”

For almost three years, David L. Maggard has served as the Chief of Airport Police, and he will continue to serve in that role, in addition to his role as the new Deputy Executive Director, until his replacement is named. Recruitment for the position of Chief of Police will begin immediately.

“I am grateful to LAWA CEO Deborah Flint and the Board of Airport Commissioners for the opportunity to continue serving at Los Angeles World Airports in this new role during this incredibly exciting time,” said Chief Maggard. “I look forward to collaboratively leading our efforts to keep our airports safe and bring the highest level of public safety service to our passengers and employees.”

Chief Maggard’s achievements at LAWA have included significant contributions to the development of the upcoming state-of-the-art Airport Police Facility, planning for the security needs and infrastructure protection of the Landside Access Modernization Program, and bringing new technology and innovation to create a more secure airport environment at both LAX and VNY.

He is a Board Member with the Airport Law Enforcement Association Network, a member of the U.S. Department of Transportation’s National In-Flight Sexual Misconduct Task Force, Past President of the California Police Chiefs Association, and served as a Governor’s appointee to the Inaugural Board of State and Community Corrections.