NOTE TO MEDIA : The Evgeny Tonkha Quartet will be performing in Terminal 4 again tomorrow, Wednesday, March 7that 10:30 AM. Members of the media who wish to cover Wednesday morning's performance can contact [email protected] for information on being escorted to through the TSA checkpoint to the performance. 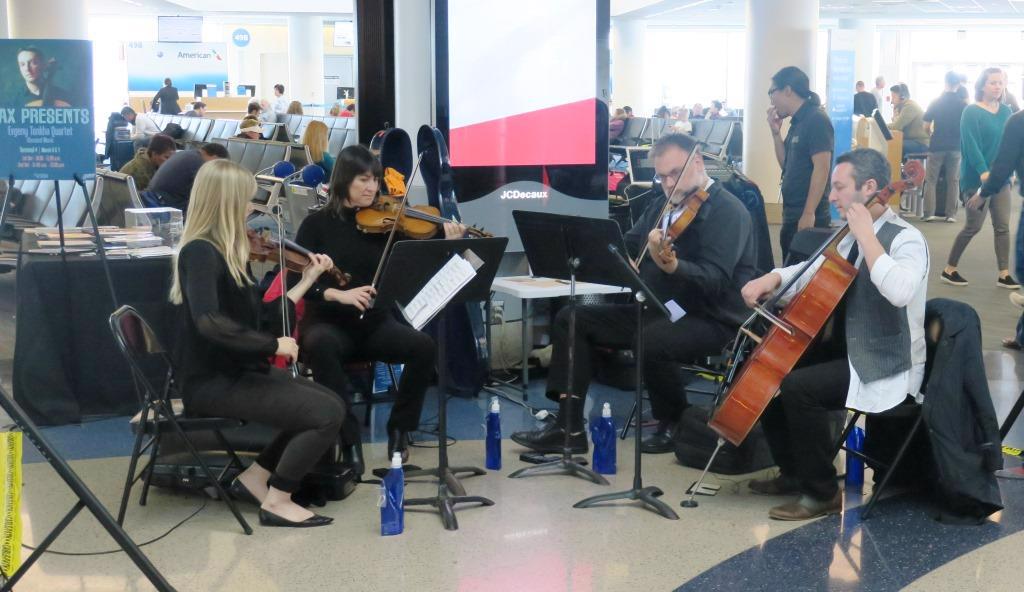 (Los Angeles, CA) Guests in Terminal 4 at Los Angeles International Airport experienced a classical start to their day with a performance by the Evgeny Tonkha Quartet kicking off the 2018 season of "LAX Presents" on Tuesday morning.

"This series is a marvelous way for us to bringLos Angeles' thriving performing arts scene to our guests from around the world and around the corner," said Trevor Daley, Deputy Executive Director and Chief of External Affairs for LAWA. "Today, our guests had the chance to experience a world-class quartet in the unique performance space of an active terminal, and we are excited about the quality and diversity of performances we will be featuringthrough LAX Presents in the coming months.”

"LAX is proud to show the traveling public that Los Angeles has some of the best music and cultural acts in the world," said Airport Art Manager Sarah Cifarelli. "These performances help make LAX feel less like a place to pass through, and more like a memorable experience in its own right." 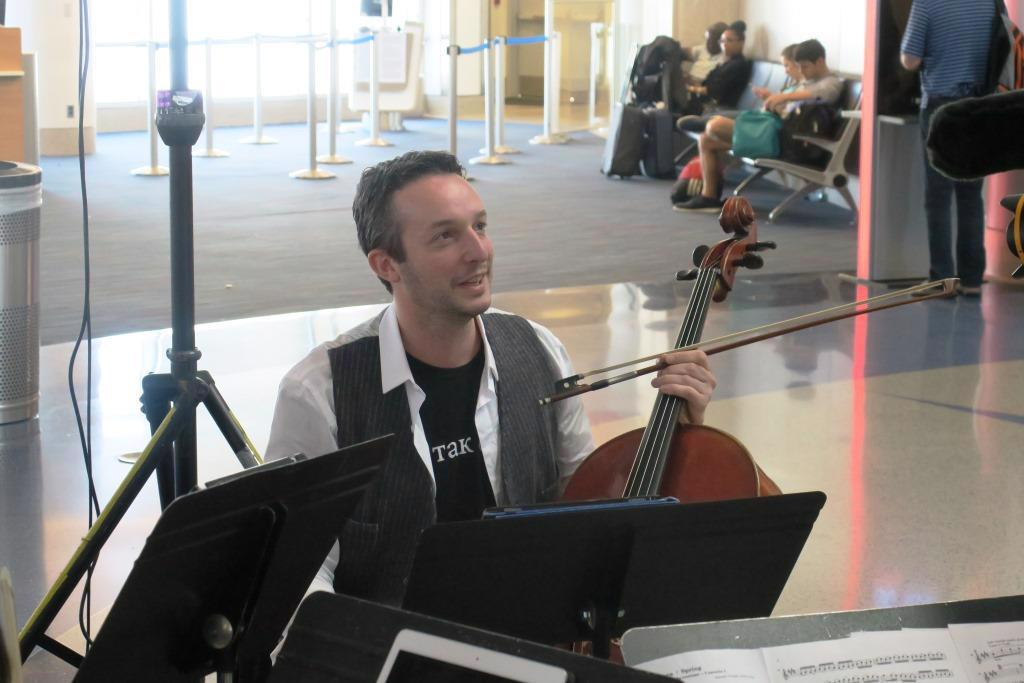 Evgeny Tonkha is an accomplished Russian cellist who has lived in Los Angeles since 2013.

The quartet'srepertoire ranged from Vivaldi to modern pieceswith a big sound that attracted the attention, and cell phones, ofhundreds of travelers and airport employees.

Now in its second year of a three-year contract, LAX Presents brings together artists from across Los Angeles to perform in the unique spaces of an international airport. The 2018 line-up includes 18 performances across nine months, including six classical performances, a DJ with dancers and a percussionist, a puppet show, and an Indian dance troupe.

Locations for this year's performances will span six terminals, including one location that is pre-TSA Security, at the Terminal 2 baggage claim area. The other performance sites will all be beyond security, in Terminals 1, 4, 5, 7 and Tom Bradley International Terminal (TBIT).

In December of 2016, the Board of Airport Commissioners (BOAC) approved funding for the three-year pilot program, inpartnership with Grand Performances, . In addition to showcasing some of L.A.’s finest musical talent, LAX Presents will enliven the airport’s public spaces and deliver distinctive cultural encounters to travelers. 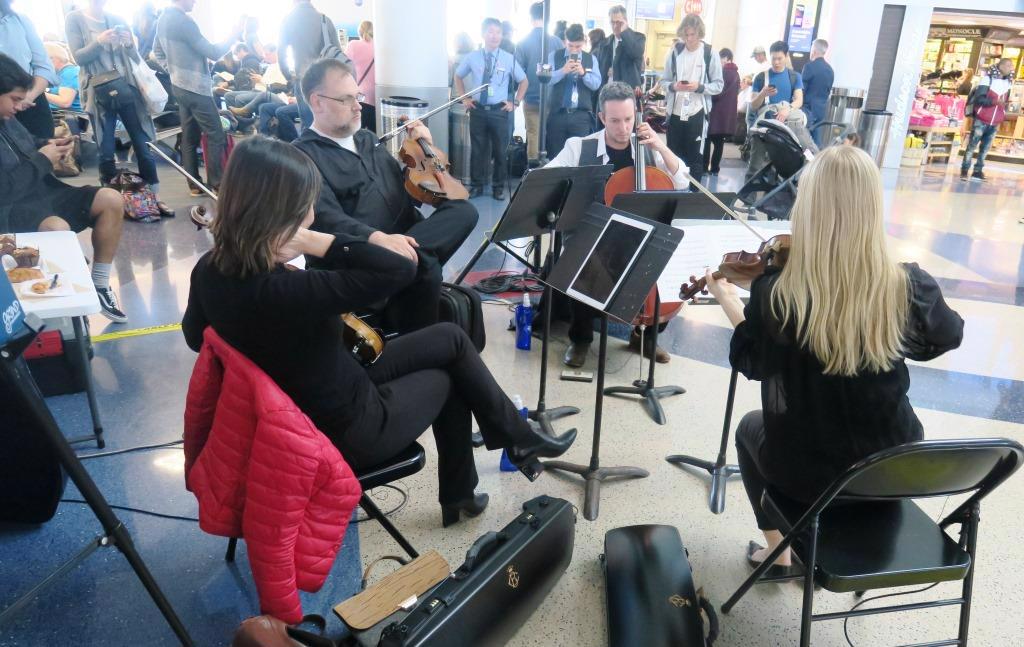 The quartet will perform again on Wednesday morning, starting at 10:30 AM, in Terminal 4.


About Los Angeles World Airports
Los Angeles World Airports (LAWA) is the City of Los Angeles department that owns and operates Los Angeles International (LAX) and Van Nuys (VNY) general aviation airports, as well as aviation-related property in Palmdale. Both play an integral role in helping to meet the Southern California regional demand for passenger, cargo and general aviation service. Both airports make a distinct contribution to the strength of the system as it provides a high level of safety, security and service for its customers, communities and stakeholders. More information can be found at flylax.com. As a covered entity under Title II of the Americans with Disabilities Act, the City of Los Angeles does not discriminate on the basis of disability and, upon request, will provide reasonable accommodation to ensure equal access to its programs, services, and activities. Alternative formats in large print, braille, audio, and other forms (if possible) will be provided upon request.

About Grand Performances
Celebrating its 32nd year, Grand Performances’ mission is to inspire community, celebrate diversity, and unite Los Angeles through free access to global performing arts.Hailed as the “Best Free Outdoor Summer Concert Series” by Los Angeles Magazine and called “a grand gift to the public... democracy in musical action” by the Los Angeles Times, Grand Performances presents high-quality music, dance, theater, and more during the summer at the breathtaking California Plaza in the heart of Downtown as well as at other venues throughout the year including the Los Angeles State Historic Park and Los Angeles World Airports. Follow @GrandPerformances on Facebook, @GrandPerfs on Twitter and Instagram and our Youtube Channel at youtube.com/grandperformances.