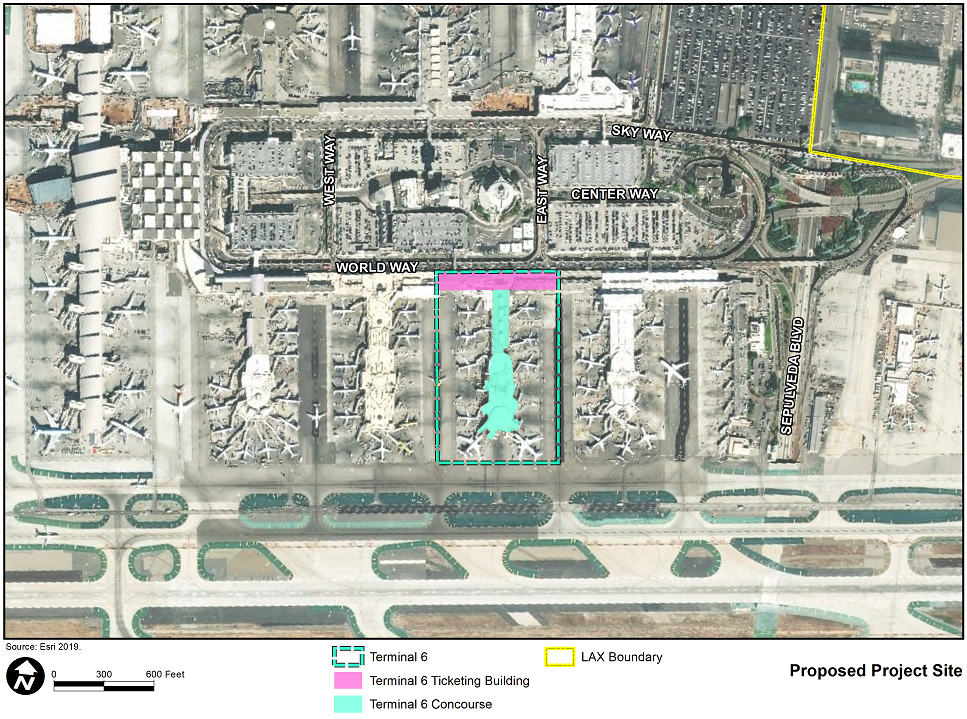 The proposed improvements to Level 2 - OPS/Apron Level include demolition and replacement of non-conforming and failing aircraft paving and pavement marking to comply with LAWA standards to improve safety and operations.

The proposed project would modify aircraft parking positions, passenger boarding bridge locations, aircraft fueling system hydrant locations, and ground support equipment parking locations within the confines of the existing T6 passenger terminal apron areas (areas that accommodate fueling, maintenance, catering, loading/unloading of baggage and cargo, aircraft servicing, boarding bridge maneuvering, passenger boarding/deplaning, and aircraft docking/pushback). The improvements proposed within the confines of the T6 aircraft apron would accommodate 15 gates and address operational issues associated with restriping the apron and the location of passenger boarding bridges within a more efficient apron layout. The physical boundaries of the T6 passenger terminal aprons are constrained by the existing adjacent Taxiway C and Taxilanes C7 (east boundary of T6 apron) and C8 (west boundary of T6 apron). The location and geometry of the taxilanes surrounding the T6 site would not be modified by the proposed project.

The Level 2 improvements would also include installation of electric charging stations to support an electric ground service equipment fleet. The existing bus gate situated between Gates 60 and 62 would be relocated and upgraded to feature appropriate operational clearances and a new drive-forward U-shaped facility with boarding/de-boarding areas to support departing and arriving international and domestic flights in one location. Operations and office space would be consolidated under the Satellite to improve storage space for operational equipment. Utilities would also be relocated as required.

Proposed improvements to Level 3 - Concourse Level are aimed at upgrading passenger amenities, holdrooms, Federal Inspection Station (FIS) access, and Security Screening Checkpoint (SSCP) areas. Changes to the holdrooms in the Connector and Satellite will be coordinated with passenger gate reconfigurations and create more spacious passenger seating and boarding areas with a target of achieving International Air Transport Association Level of Service of “optimum” to the extent practicable.

Improvements proposed at Level 4 - Lounge Level are aimed at improving passenger experience and service to airline lounge customers and would involve the reconfiguration and expansion of Level 4 to the south of the existing Alaska Airlines Lounge area to improve access and enhance the passenger experience in the lounge. Two elevators would be added on the east side of the Satellite.

The current T6 facility is a multi-story T-shaped building that was originally built in 1959. The current facility reflects a number of subsequent improvements that have repaired and added to the original 1959 building. The Concourse consists of three seismically separated structures: the Connector, constructed in 1982; the Satellite, constructed in 1959; and the Satellite Extension, constructed in 1970. In the last 10 years, two interior improvement projects were carried out to improve concessions spaces, circulation, infrastructure, and passenger holdrooms.

T6 is a common use, multi-carrier LAX terminal that currently supports the operation of several airlines including Alaska Airlines, Air Canada, Boutique Air, Mokulele Airlines, Viva Aerobus and XL Airways France. On peak travel days, T6 may host up to 113 daily departures and 111 daily arrivals, generating approximately 15,757 daily passenger departures and 15,527 daily passenger arrivals. T6 has been in continuous operation since its opening in 1959.