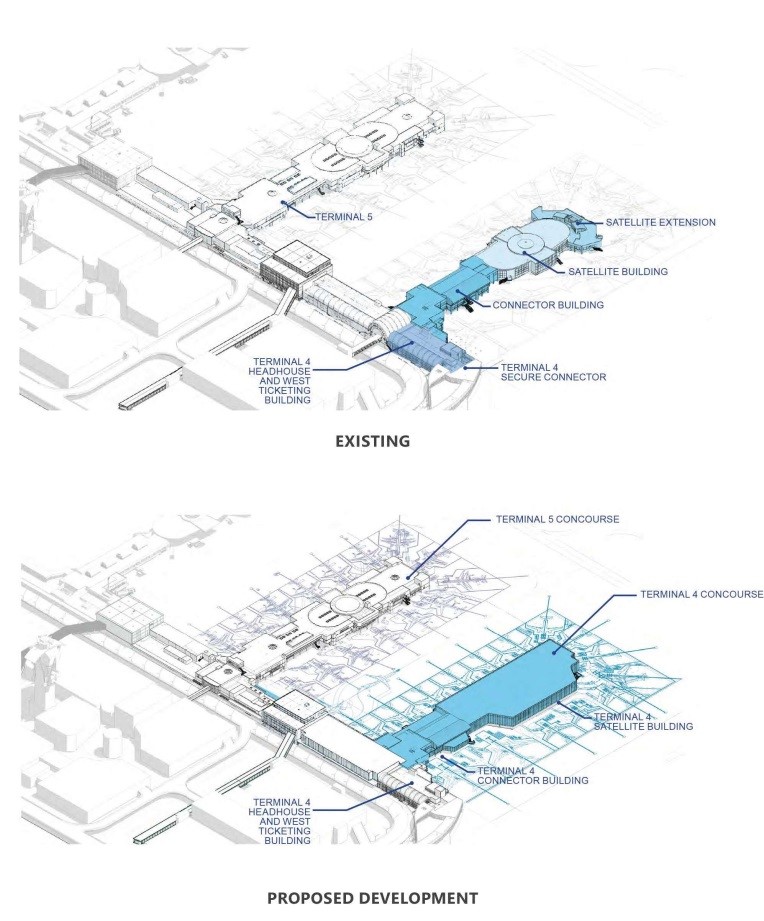 The proposed Terminal 4 (T4) Modernization Project (Proposed Project) would partially demolish and renovate the T4 Concourse, renovate the interior of the West Ticketing Building, realign Taxilane C9, and reconstruct the apron surrounding the T4 Concourse to improve passenger level of service, accommodate modern aircraft fleets and operational support equipment, and provide seismic resiliency and structural safety in accordance with the California Building Standards Code and American Society of Civil Engineers (ASCE) standards. The Proposed Project would not increase the existing number of contact gates (15); however, the aircraft parking positions would be realigned to provide greater operational flexibility.

T4 was originally opened in 1961 as a Satellite terminal building and a separate headhouse and ticketing building; however, the terminal has undergone several alterations and the Satellite is now connected to the T4 Headhouse, which includes a central Headhouse section and the East and West Ticketing Buildings. The central section of the T4 Headhouse contains the main security screening check point (SSCP) for T4 passengers and the connection/entrance between the Headhouse and the remainder of T4. The East and West Ticketing Building portions of the T4 Headhouse contain passenger check-in, administrative offices, and baggage claim carousels on the Arrivals level. The T4 Concourse is currently comprised of semi-independent structures, which include the original Satellite and T4 Concourse Connector building (the Connector building) and additions made through successive enhancement projects. The Connector building, which connects the Headhouse to the Satellite, opened in 1983 and was renovated in 2001. The T4 Satellite also includes the Satellite Extension, which opened in 1969 and was subsequently renovated in 1999. The substructures within the Connector building, the Satellite, and the Satellite Extension are all seismically deficient and require replacement or renovation to comply with ASCE and California Building Standards Code.

The Proposed Project would include demolition of the unsalvageable portions of the T4 Concourse (the Satellite and Satellite Extension) and reinforcement of the Connector, via building expansion, for continued use. The proposed new construction and structural supporting elements would increase the square footage of the T4 Concourse. The existing T4 Concourse building envelope would be expanded to accommodate enhancements to the building and within the airfield apron (see Exhibit 2). The Connector would be partially demolished and seismically upgraded to meet code requirements. The realigned Connector would accommodate improved internal and apron-area operations. The existing tunnel with mosaic tile murals that connects the Concourse to baggage claim in the lower level of the T4 Headhouse would not be affected. The mosaic tile murals identified in the LAX Preservation Plan as remnant features from the 1961-62 original construction of T4.