Project Background:
Century Boulevard is considered by many to be the “Gateway to Los Angeles”. It is the first impression of Southern California for close to 60 million visitors a year who exit Los Angeles International Airport (LAX) and travel east to the I-405 freeway. The Century Corridor Streetscape Plan will enhance and redefine this Gateway experience by establishing a new unified, distinctive, pedestrian-friendly, urban design framework to help guide the implementation of future streetscape improvements along the corridor and throughout the surrounding hotel/office business district (district).

Streetscape plans have the ability to transform unattractive auto-centric streets into safe and inviting pedestrian-friendly commercial corridors. This is done by re-imagining the existing roadway and creating new guidelines for streetscape improvements in the public right-of-way. Guidelines often include expanding sidewalks; introducing new street trees, street furniture and street lights; improving bicycle network connectivity; and creating new public gathering spaces. By establishing such guidelines, the Century Corridor Streetscape Plan aims to improve the pedestrian experience along Century Boulevard and create an environment where existing and future businesses can thrive.

Some examples of great streets include Culver Boulevard in Downtown Culver City and Santa Monica Boulevard in West Hollywood, where streetscape improvements have created additional open space for pedestrians to celebrate the life of a city. These streetscape improvements have in turn enriched each neighborhood’s economic vitality as more pedestrians have come out to walk and support local businesses. Century Boulevard and the surrounding hotel/office business district is distinct from Downtown Culver City and West Hollywood, yet key lessons can be learned from these neighborhoods and applied to the development of the Century Corridor Streetscape Plan. One lesson is that local businesses benefit greatly from increased pedestrian activity. The surrounding district will be better positioned to economically flourish by providing pedestrian amenities and public gathering spaces for the surrounding hotel guests and office/airport employees to enjoy.


In August 2013, Los Angeles World Airports (LAWA) and the City of Los Angeles Department of City Planning (DCP), in close partnership with the Gateway to Los Angeles Business Improvement District, kicked-off a multi-year effort to develop the Century Corridor Streetscape Plan. This project, in unison with the Department of City Planning’s current evaluation of possible new land use regulatory tools for the surrounding hotel/office business district, will have the potential to not only enhance the visual qualities of Century Boulevard but also help transform the district into a significant regional economic asset for the City of Los Angeles.

The Century Corridor Streetscape Plan is partially funded by a $590,000 grant from Metro’s Transit Oriented Development Planning Grant Program. This grant program is designed to spur the adoption of local land use regulations that create environments supportive of transit oriented development in Los Angeles County. 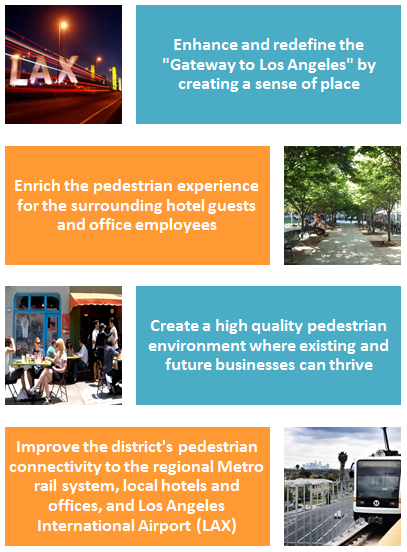