LAWA’s mission is to be an innovative leader in regional and global transportation acting proactively regarding community and environmental issues. To achieve this mission, LAWA developed the strategic objective of "demonstrating a continuing commitment to the community". With this in mind, LAWA embarked on the study of a Noise and Access Restriction at Los Angeles International Airport (LAX) in an attempt to provide meaningful noise relief to communities impacted by certain non-conforming aircraft departing to the east during the noise sensitive hours of midnight to 6:30 a.m., when all other aircraft are able to take off to the west.

The process that an airport proprietor must follow prior to adopting such a rule is dictated by requirements specified in the Airport Noise and Capacity Act of 1990 (ANCA) and the U.S. Code of Federal Regulations, Title 14, Part 161 (also known as Federal Aviation Regulations, or FAR, Part 161).

In 2001 the LAX/Community Noise Roundtable (Roundtable) determined that a serious noise disturbance problem exists with the late night easterly departures and asked LAWA to attempt to eliminate these operations through the Part 161 process. LAWA designated the LAX Part 161 Study as a mitigation measure in the Mitigation Monitoring and Reporting Program (MMRP) of the LAX Master Plan EIR/EIS. Further, LAWA agreed to conduct the LAX Part 161 Study in the Community Benefits Agreement (CBA) negotiated with the LAX Coalition for Economic, Environmental, and Educational Justice in support of the LAX Master Plan, and in the LAX Master Plan Stipulated Settlement Agreement.

Board of Airport Commissioners Actions Pertaining to the Part 161 Studies

The Airport Noise and Capacity Act of 1990.

On November 5, 1990, the U.S. Congress enacted the Airport Noise and Capacity Act of 1990, commonly referred to as ANCA. This legislation called for the FAA to develop a national aviation noise policy with accompanying regulations to implement the Act, including the imposition of limits on an airport´s ability to adopt new noise or use restrictions affecting either Stage 2, or the then newer, quieter Stage 3 aircraft. The FAA implemented ANCA through a new regulation, FAR Part 161.

FAR Part 161, entitled Notice and Approval of Airport Noise and Access Restrictions, sets forth definitions of several key terms that determine the scope of the regulation. Part 161 requires that airport proprietors examine the impacts of a proposed noise or access restriction within an "airport noise study area". That area must include all property that lies within the 65 dB DNL (or, for California airports, 65 dB CNEL) noise exposure contour.

The regulations distinguish among three types of noise and access restrictions:

The procedures for enacting each type, and the FAA's scrutiny of each, are different. Since the proposed restriction of nighttime operations at LAX would affect Stage 3 aircraft and even newer Stage 4 aircraft (about which Part 161 is silent), the highest level of review and approval is required.

ANCA and the associated Part 161 regulation impose substantial impediments to local restrictions on Stage 3 aircraft, and requires a rigorous process to obtain FAA approval of a Stage 3 restriction. The process has three principal elements:

As the proprietor of LAX and proposer of the restriction, LAWA must collect substantial evidence to prove that:

In essence, the airport proprietor must show that the benefits of the restriction outweigh the costs. The noise benefits can be defined as decreases in noise exposure above 65 dB DNL (65 dB CNEL in California), environmental justice, improvement in quality of life, and reduction in sleep disturbance to improve educational and work force productivity. In those areas with noise sensitive land uses costs must be expressed in financial terms, though Part 161 provides little guidance regarding the exact nature of such an evaluation.

What is the Specific Noise Rule Proposed for LAX?

The goal of the LAX Part 161 Study is to establish an operational limitation that would restrict the easterly departure of all aircraft, with certain exemptions, between the hours of Midnight and 6:30 a.m. when the airport is in Over Ocean Operations, or when it remains in Westerly Operations during these hours. The exact wording of the restriction can be found in the LAX Part 161 application.

Over Ocean Operation (OOO) is the existing voluntary noise abatement runway use program that has been in place at LAX since 1985. During OOO, departing aircraft take off to the west — away from the City — while arriving aircraft are able to come in over the ocean and land to the east, also avoiding the City. Operations can generally occur in these opposing directions as long as the operational conditions on the airfield are favorable, visibility at the west end of the runways are within minimum requirements, and the tailwind component of the wind does not exceed 10 knots.

The OOO runway use program has kept many late night flights out over the water as they arrive or depart from the airport. Yet, because a pilot can request to deviate from the established procedure, occasional non-conforming flights choose to take off to the east over the City causing significant disruption of sleep. If implemented, the new noise rule would restrict the ability of a pilot to request these departure deviations and resulting easterly departures.

Several categories of aircraft will be exempt from the restriction, including: military aircraft; medical/mercy flights; and government owned/operated aircraft involved in law enforcement, fire/rescue operations, or other emergency operations. It should be noted that there were no recorded east departures by aircraft within these categories since LAWA started tracking non-conforming easterly departures in 2001.

The figure below depicts a several-day sample of radar tracks superimposed on each other to show typical nighttime traffic flows at LAX when the airport is in Over Ocean Operations. Over Ocean arrivals are shown in green coming in north of the airport, joining other arrival streams to the west and turning inbound, lining up to land to the east. Over Ocean departures are shown in orange, most of them making an initial left turn to 210 degrees after takeoff, followed by a right turn to the west on their way to Pacific rim destinations, or by a further left turn to the south where the traffic flow splits again to southerly and easterly destinations. All of this traffic conforms to the voluntary OOO runway use program.

Non-conforming departures occurring during these nighttime hours are shown in purple. There are many fewer of these compared to normal OOO departures, but their easterly takeoff clearly takes them over heavily populated areas that otherwise experience little flight activity during the midnight to 6:30 a.m. time period. These are representative of the types of operations that LAWA is trying to restrict through the Part 161 study process. 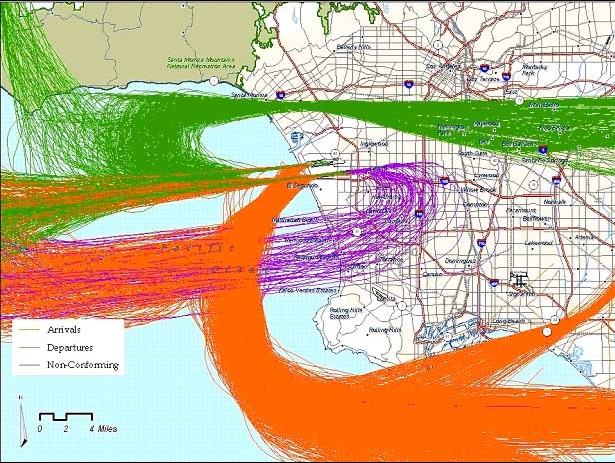 The City of Los Angeles (the “City”) has now completed its analysis of the effects of these non-conforming flights and has produced a report and related appendices that serve as the basis for the application submitted to the FAA for approval of the proposed restriction. Those documents are available for review on this web site at Application for Approval of a Runway Use Restriction. The legal notice announcing the proposed use restriction is also on this web site at Notice of Proposed Restriction