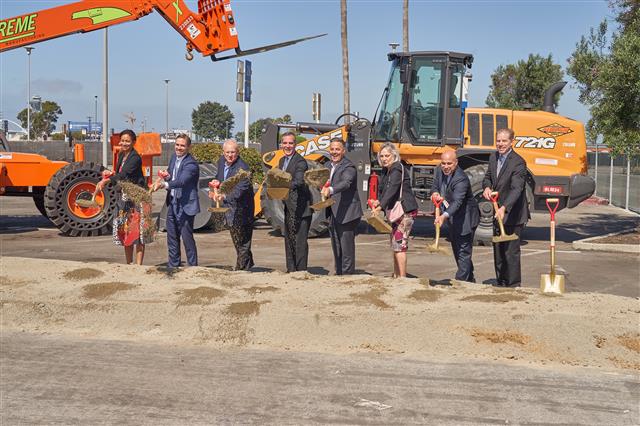 “Today’s groundbreaking is an important milestone in our work to build the world-class airport travelers expect and deserve,” said Mayor Eric Garcetti. “Once complete, the ITF-West will stand as a new front door to our airport welcoming travelers, reducing traffic congestion, and offering a seamless connection with the upcoming Automated People Mover.”

"This is another milestone as LAX becomes both a world-class airport and first-class neighbor," said Councilmember Mike Bonin, who represents the communities adjacent to the airport. "This new facility will create one of three convenient alternatives to driving into the airport’s crowded central terminal area. From here, an elevated tram will pick up and drop off travelers in a matter of minutes, reducing frustration for those coming to and from the airport, and reducing traffic for neighbors I represent.”

"With tourism to Los Angeles at an all-time high, the continuing modernization of LAX will exponentially multiply positive economic impacts throughout the region," said Councilmember Joe Buscaino, Chair of the Trade, Travel and Tourism Committee. "ITF-West will serve visitors and LAX employees using the latest green and smart technology while preparing Los Angeles to welcome visitors for the 2028 Olympics." 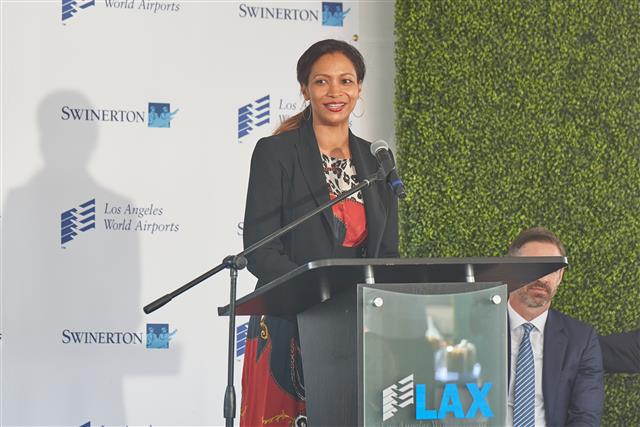 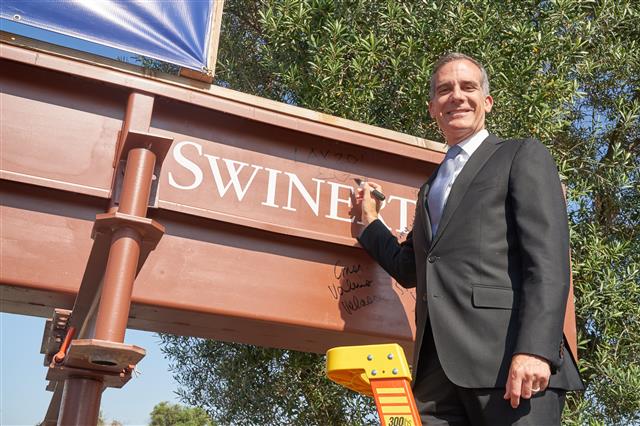 Mayor Eric Garcetti signs a beam at the event, which will be incorporated in the future structure.

The four-story structure will provide much-needed parking for the fourth-busiest airport in the world, adding approximately 4,500 stalls – more than half of the parking stalls located in the Central Terminal Area (CTA) structures today. Featuring short and long-term parking options, the facility also will boast a Meet and Greet area, valet parking, electrical vehicle charging stations, and potential space for concessions. A shuttle will transport travelers and employees from the ITF-West to and from the CTA until completion of the Automated People Mover (APM) project in 2023. The ITF-West will feature an APM station, providing direct access to the new train system, and time-guaranteed access to the CTA once the APM is completed.

“In Los Angeles, parking is at a premium, especially at the airport,” said Sean Burton, President, Board of Airport Commissioners. “As a Board, we are focused on offering options and adapting to the ever-changing patterns of transportation. The Intermodal Transportation Facility – West will provide new parking and mobility options for our guests and will be ready to adapt to future airport needs.”

The ITF-West also will house the 26,000 square foot LAWA Security & Badging Office (SBO), which will benefit the more than 55,000 badged employees at LAWA and the environment. Currently, the SBO is located on the far west side of the airport off Pershing Avenue and World Way. With the APM system connecting to the ITF-West and Airport Metro Connector Station in 2023, employees will be able to utilize public transportation and the APM to take care of their badging needs, helping to take vehicles off the roadways and lower emissions.

“One year ago today, our Board of Airport Commissioners approved the contract for Swinerton Builders to design and construct the Intermodal Transportation Facility – West, and as we now start to construct this facility, it’s a symbolic step towards reliable and functional access to LAX ” said Deborah Flint, Chief Executive Officer, LAWA. “By providing new options for our guests and employees with the latest parking technology, and multi-modality we are preparing LAX for the future of mobility.” 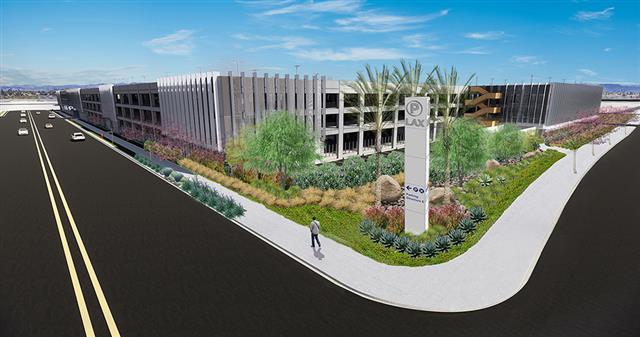 The Intermodal Transportation Facility - West will open in 2021.

The experienced team of Swinerton Builders, featuring Watry and Gensler, is designing and building the project. The Swinerton team is fresh off of building the San Diego Airport Terminal 2 Parking Plaza and specializes in the construction of large parking structures.