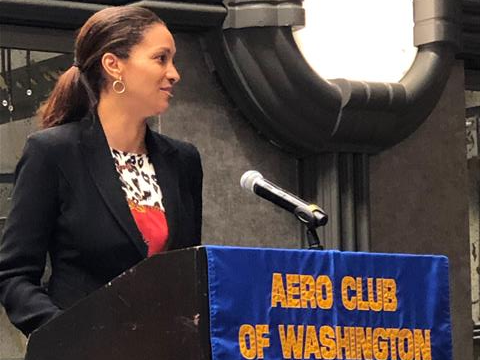 (Washington, D.C.) Los Angeles World Airports CEO Deborah Flint provided the keynote address to the Aero Club of Washington, D.C. on Wednesday, June 26. The following is the complete text of her remarks as delivered:

It is wonderful to see the many partners here, a reflection of the collaboration and synergy that are the root of this great industry. Personally, I especially appreciate the supporters in this room and those who have come before who opened doors for women, people of color, and the spectrum of diversity so I can be here.

There will come a day that, like the Golden State Warriors will reclaim the NBA ring after a hiatus, the time will come for the U.S. to be the global leader in airports once again.

The United States is the birthplace of aviation – from when, in that field in North Carolina in December 1903, the Wright brothers made their famous flight, taking us into a new era, to decades later when the iconic theme building at LAX became a symbol of the modern jet era. The U.S. led in exploring new worlds and pushing the boundaries of man – across the world and into aerospace.

Now, decades later, our gateway airports are referred to as “third world.”

Most airports in the U.S., LAX included, cannot be found in the rankings of the top international airports. In Skytrax’s 2019 Airport Rankings, you find Singapore’s Changi Airport. Tokyo Haneda. Seoul, Korea’s Incheon Airport. Hamad in Qatar. They are leading the way in capability, guest experience, amenities and technology.

The first in the U.S. is at number 32 – Denver International. My own LAX comes in at number 71. Why are we ranked so low in international scoring? Because we have failed to invest in our infrastructure to the level we need to these past decades. Now is the time to change that.

The U.S. is playing catch up, while other countries push the boundaries of what an airport can be. What I expected at the airport as a 10 year old is not what my 16-year old daughter expects today.

When the world arrives, they will find a transformed LAX – thanks to the support of our mayor, board, and region. We are making a $14 billion investment in an Automated People Mover train system, roadways, a Consolidated Rent-A-Car facility that will combine the 20 separate facilities that burden our neighborhoods and roadways, a connection to regional rail, and modernizing each terminal. And we are beginning the environmental review to improve the airfield, build a new concourse off of Terminal 1, and a new Terminal 9, which requires billions of additional dollars.

We are in a unique positon and market as the second busiest airport in the country and the fourth busiest in the world. Not all airports have the ability to finance as we can.

A new level of investment in infrastructure is needed and for airports this can be real by bringing the Passenger Facility Charge to its original buying power.

It is time. It has been two decades that the PFC has been unchanged even though there have been 26 models of the iPod, which was released the same year. It has been so long that the styles have even come back – parachute pants and tracksuits are back in again. The ask is to increase the PFC from $4.50 to $8.50 and index it for inflation in the future.

That will make a difference for airports of all sizes – large, medium, and small.

At LAX, our PFC collections are obligated to 2047. An increase would open up funding for a future leader at least a decade sooner. At that time, we know the needs will only be greater, as more is expected of airports.

In accepting this charge to bring about a new era, U.S. airports must grapple with new horizons. Like Curry changed the game with 3 point precision, and Toronto adapted and won, so must we.

First is the environment. In airports, the only thing to feel shameful about should be a bad travel outfit. We cannot allow “flight shaming” to take hold as consumers make more green choices, and we must correct misconceptions about aviation.

We should do more food donation programs, recycling programs, and electric and alternative fuel fleets both on the road and in our ground service equipment. At LAX, our policy for building is, at a minimum, LEED silver and gold.

The public needs to see that this is a socially conscious industry. And they need to hear it, too.

The environmental benefits of Metroplex fall literally on deaf ears because of increased noise complaints. An industry that has benefited from performance-based navigation must in turn benefit communities by investing in today’s and tomorrow’s even quieter aircraft. The issues of carbon and community cohesion can cause costly delay and are serious threats for all of us.

When we procured our public-private partnership, or P3 contracts for the Automated People Mover train and Consolidated Rent-A-Car facility, or ConRAC, inclusion factored heavily. We asked industry to bring the best private sector construction approaches and reliability to the train, think outside the box to future proof the ConRAC, and also create careers and change lives. The private sector made commitments of 30 percent local hire, not just during construction, but for the 30- and 28-year lives of the contracts.

We applaud the work of the Aero Club and its foundation for tomorrow’s leaders. This industry needs next generation talent now.

At LAX, through a partnership with the local trade union, community college system and workforce development non-profits, we created an eight-week training program for hard-to-employ people to earn apprenticeships in trades. HireLAX, since it started last year, has graduated 108 students in five classes. Fifty percent had previous involvement in the criminal justice system and 25 percent have been women.

Back to my 16 year old and her airport expectations. For her, wifi and cellular are like air – as they have become for all of us. Her face is everything. I am talking about biometric aircraft boarding gates, self baggage drop, TSA and CBP screening – all biometrically enabled at LAX today. While privacy and data security must have high bars, the efficiency of biometrics is astounding. We boarded an A380 using biometric facial boarding in 20 minutes.

Our challenge is to reach an international standard within and outside of aviation. The digital experience of the future has already arrived. Real time precise information is expected on maps during construction, whether en route or in terminal, to show what has changed from minutes, hours, days, or weeks ago. Wait times for everything are expected – both real-time and predictive. Personalized shopping and pre-ordering plus food delivery are the expectation. For operations teams it is smart restrooms, as featured on Jimmy Kimmel, to deploy cleaning resources more effectively. This is just a part of reality today.

The same 16-year old did not know the term “mobile phone” – to her it is just a phone. But mobility is a word to pay attention to. We recently redesigned part of our organization to include a mobility group because in congested regions like Los Angeles, airports must help solve mass transportation. Driverless cars are coming one day. Already today we have scooters, toll lanes, congestion pricing, smart cars and buses, all of which are opportunities that can improve access and evolve ground transportation strategies and business models.

Yet the skies we know so well are the new frontier once again.

We see great promise of Unmanned Aerial Systems for perimeter inspections, security and safety applications. But a Gatwick-like incident at LAX, or what we just saw in the last 24 hours at Changi in Singapore, would be devastating to not just the regional but the national economy.

We cannot have enough urgency in developing clear interagency coordination and protocols for protecting our airports. This is not an issue that each airport can or should be figuring out on its own.

As the co-chair of the UAS Mitigation at Airports Blue Ribbon Task Force recently established by ACI-NA and AUVSI, I am working with co-chair Michael Huerta and my peers to develop policy recommendations. Our first report will be released shortly, and I encourage you all to take a look at it, and join us and the Department of Transportation’s Drone Advisory Committee in these efforts.

As LAX has grown by 20 million annual passengers in five years, we have seen our Skytrax rankings increase – to 71st place – a jump of 27 spots in the world ranking. I am optimistic for propelling further at LAX and for my peers in this country to do the same.

Airport by airport, working with our partners in airlines and throughout the industry, we need to be excited, energetic and chase the next evolution.

We need to push for our airports to be more innovative, sustainable, to be stewards for local communities, to bring the joy and certainty back to air travel, and together get the funding to invest and let our industry shine.

At Los Angeles World Airports our vision is Gold Standard Airports … delivered. The U.S. deserves that vision for each and every one of our airports.

LAX is also the second-most popular airport in the world to appear on rel="noopener noreferrer" Instagram, according to wego.com. LAX is part of a system of two Southern California airports – along with Van Nuys general aviation – that are owned and operated by Los Angeles World Airports, a proprietary department of the City of Los Angeles that receives no funding from the City’s general fund.