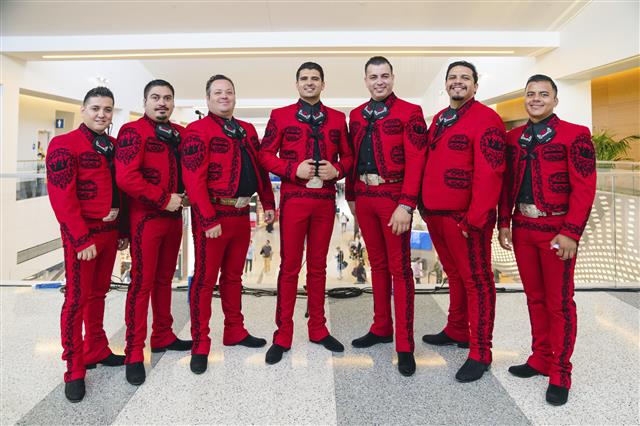 (Los Angeles, CA) This week marks the beginning of Latino Heritage Month, and Los Angeles International Airport (LAX) is proud to honor the influence of Latinx culture through a variety of culinary offerings, cultural performances, art and guest experiences. Latin America is a growing market for LAX, with more than 5.7 million passengers flying between LAX and Latin America this year – an increase of more than 4 percent from the previous year.

“With 413 nonstop weekly departures to Latin America, and four of LAX's 10 largest markets located in Mexico, LAX is one of the top U.S. gateway airports to the Latin American region,” said Barbara Yamamoto, Director of Guest Experience and Innovation, Los Angeles World Airports. “Los Angeles is a destination rich with the contributions and influences of the Latinx community, and LAX is proud to showcase the Latinx artists, flavors, music and influence within the aviation industry.”

Latinx Flavors at LAX
Starting this week, LAX is partnering with Unibail-Rodamco-Westfield's airports group, URW Airports, to bring a paleta (Mexican popsicles) cart to LAX, treating airport guests to complimentary paletas while supplies last. While locations are subject to change, below are the current dates, locations and times when airport guests can enjoy a frozen Mexican treat: 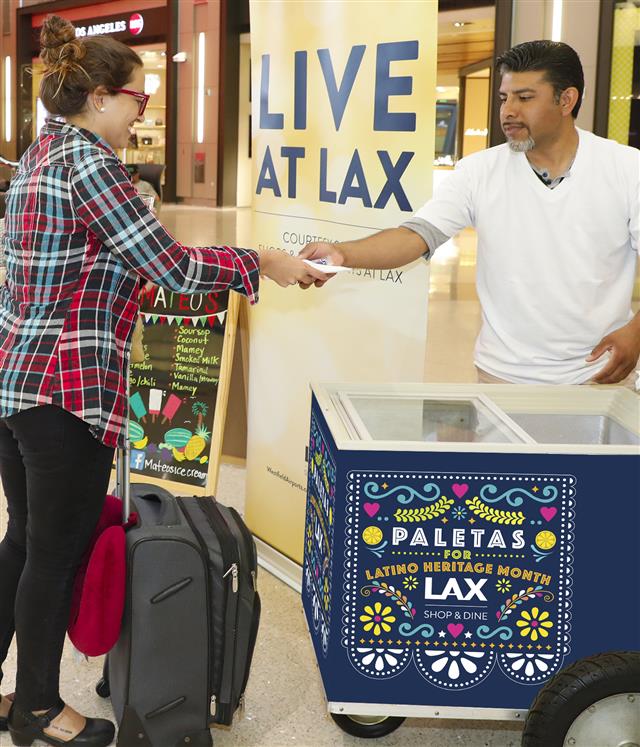 LAX guests can enjoy complimentary paletas during Latino Heritage Month on the dates and at the locations noted above.

Airport guests can also experience flavors from Latin America at the following LAX concessionaires and retailers:

Border Grill (Tom Bradley International Terminal): With a menu of “modern Mexican” dishes, Border Grill puts a new spin on the authentic home cooking of Oaxaca and the Yucatan. The vibrant cantina is the perfect place to indulge in mouth-watering Mexican cuisine, or add a little spice to any trip with a cocktail from the full-service bar.

Cantina Laredo (Tom Bradley International Terminal): Authentic Mexican is a staple in Southern California, and Cantina Laredo offers some of the best around, from small plates of ceviche and fresh guacamole to nachos, quesadillas and frozen margaritas. Breakfast tacos are available for early travelers, and the pre-security location makes it possible to enjoy a meal with non-ticketed loved ones before a flight. 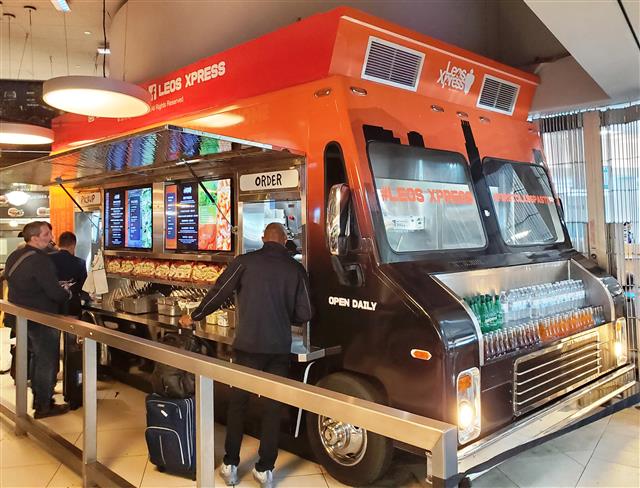 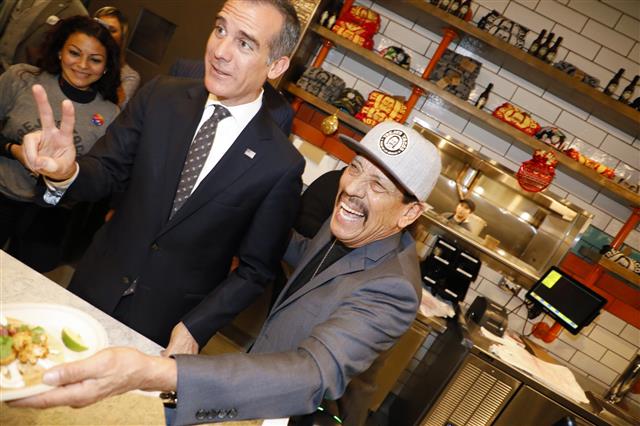 Urth Caffé (Terminal 1): Urth Caffé offers exclusive organic coffees and fine teas, many of which are sourced in Latin America. A customer favorite includes Urth's most famous blended ice drink, the Spanish Latte Granita and the Travelers Blend coffee can only be found at the LAX location.

Univision (Terminal 2): Stocked with travel essentials, including newspapers, magazines, cold beverages and snacks, this convenient one-stop shop is associated with the popular Spanish-language network and specifically geared toward the Latinx market.

La Familia (Terminal 3): This vibrant restaurant will have you craving everything on the menu. Take a seat and bask in the moment while enjoying a delicious meal & refreshing beverage.

¡Loteria! Grill (Terminal 5 and Terminal 7): ¡Loteria! Grill provides regional Mexican dishes with fresh and homemade salsas. Passenger discounts for the Terminal 5 location only include (12 and under) Kid’s Cheese Quesadilla with Chips and 16 o.z. soda/drink $8.99. 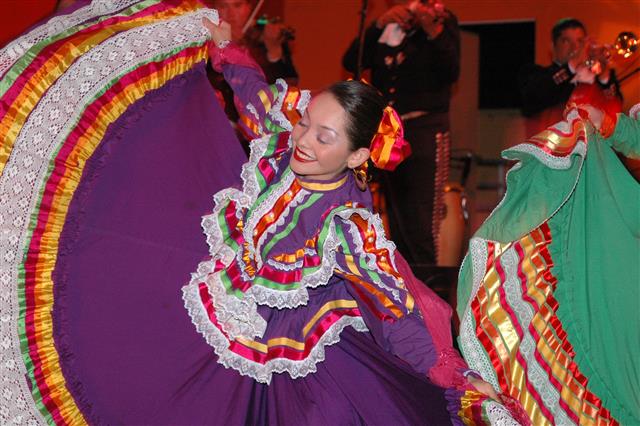 Latinx Dance and Art at LAX
Established in 1990, the mission of the LAX Art Program is to enhance and humanize the travel experience by providing diverse and memorable art experiences throughout the airport. The LAX Art Program currently includes temporary exhibitions, permanent installations, and cultural performances. 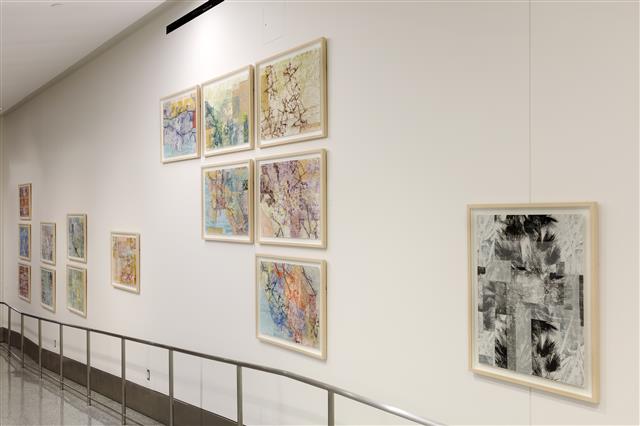 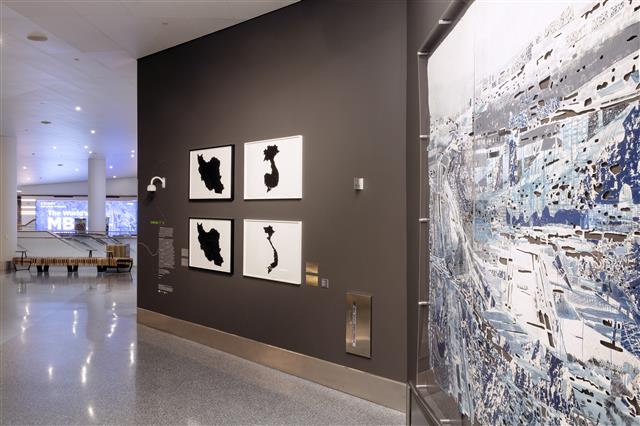 Additionally, L.A.-based Latin American artists Marianne Sadowki and Bia Gayotto’s artistic work is currently featured in Terminal 1 through early next year. Marianne Sadowski, a Mexican-American printmaker, has a solo exhibition titled Rhizomatic Variations in Terminal 1. Her artwork celebrates Los Angeles’ vast layers of diversity: people coming from all over to seek their dreams; iconic landscapes of freeways and Mexican fan palms; spectacular sunsets splashing an endless maze of streets and buildings; and creeping nature peeking through overlooked spaces. Her series of prints was created by layering different maps of Los Angeles with imagery of native and non-native plants seen throughout the city. "Rhizomatic Variations" is on view for ticketed passengers until February 2020.

Bia Gayotto, a Brazilian-American artist, curator and educator, currently has a curated group exhibition on view in Terminal 1. Latitude 33° 56' features the work of eight Los Angeles-based artists who use maps or mapping techniques to translate their unique experiences of place. From geographical to psychological explorations, their artworks encompass multiple subjects, viewpoints, distances and time sequences. Latitude 33° 56' is on view for ticketed passengers until March 2020. 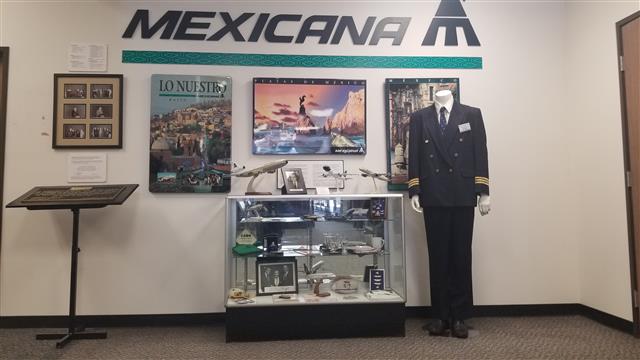 Latinx on @flyLAXairport
On social media every week, LAX will feature Latinx chefs at LAX who create culinary experiences and share Los Angeles flavors that guests and employees enjoy. Follow our Instagram and Twitter (@flylaxairport) to learn more about our chefs. If you happen to visit any of the restaurants that our chefs oversee, experience the artwork or performances, noted above or even enjoy a paleta, snap a photo and tag us at #LatinxsAtLAX