Thank you for your interest in the LAX Air Quality and Source Apportionment Study!

This landmark air quality study was conducted by Los Angeles World Airports (LAWA) and watched closely by other airport authorities throughout the world. LAWA committed to undertake this effort to quantify LAX's contribution to the total emissions and concentrations of air pollutants in the surrounding neighborhoods. The study satisfies requirements of the LAX Master Plan Mitigation and Monitoring Reporting Program commitments and various legal agreements.

Efforts to initiate this Air Quality and Source Apportionment Study go back over a decade. In 1999, LAWA began its efforts to study LAX’s contribution to area emissions. However, the tragic events of September 11, 2001 brought to a halt the implementation of the study just as the field work (i.e., air monitoring) was beginning, and LAWA worked diligently over the next several years to re-initiate the study components.

In 2006, the project was formally reinitiated with the reestablishment of a Technical Working Group (TWG) composed of highly qualified professionals to advise and help navigate around the challenges facing this study. The TWG is comprised of air quality scientists and researchers from the U.S. Environmental Protection Agency (EPA), California Air Resources Board (CARB), South Coast Air Quality Management District (AQMD), State of California Office of Environmental Health Hazard Assessment (OEHHA), Federal Aviation Administration (FAA), and community organizations. While LAWA retained ultimate decision-making authority and responsibility for the study, LAWA and the TWG worked closely toward consensus-based decision-making and sought agreement among the respective participants on the scientific methods and processes used to conduct the study. CDM Smith has served in a scientific advisory role to LAWA management. 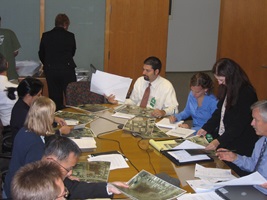