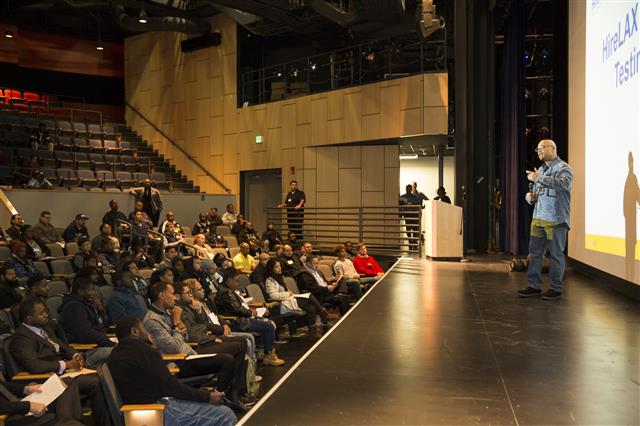 HireLAX is a workforce development program that prepares local residents for skilled craft labor careers to support the multibillion-dollar capital improvement program at Los Angeles International Airport (LAX).The orientation occurred onSaturday, January 20, at Southwest College, and 135 individuals attended. After participating in an hour-long orientation on the program, which covered the logistics, opportunities, and expectations of the program, 120 of those individuals chose to participate in the interview process.

"We cannot build the LAX of the future without hiring local workers today,” said Trevor Daley, Deputy Executive Director for External Affairs, LAWA. "LAX has committed to strong local hire requirements for our construction and modernization efforts, and we know that HireLAX will help us meet those goals by helping local men and women prepare for successful construction careers that can begin right here at our airport.” 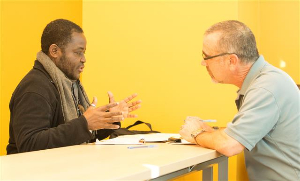 The eight-week HireLAX program begins on Monday, February 5, at 7:00 a.m. Approximately thirty students will be chosen for the second class, based on their applications and interviews. Those who are not chosen for the HireLAX program are given referrals and assistance in applying for other construction training programs.

Contractors performing work on LAWA projects are expected to exceed 30 percent local participation with a workforce that reflects the diversity of Los Angeles. The HireLAX program trains local residents to earn these jobs. Under the HireLAX framework, program graduates will be connected with union apprenticeship programs and contractors, so they can begin their construction careers at LAX.

On November 3, 2017, the first class of HireLAX students graduated. These 26 graduates, who started in early September, were selected to participate out of an initial 100 who attended a mandatory orientation in August. The graduating 26 reflected the diversity of the local community, and included 42% from Inglewood; 19% female; 65% African American; 31% Hispanic; and 46% previous or current involvement with the criminal justice system. On graduation day, nine of the students had already been sponsored for jobs by a union or company. As of today, more than halfhave accepted construction positions.

The HireLAX program was developed within the framework of LAWA’s Project Labor Agreement (PLA), which is a partnership between LAWA, its contractors and the local construction unions. The PLA requires contractors and unions to refer local workers to the project, and outreach to persons who have not previously qualified to be employed on construction projects, especially minorities and women. The LAWA PLA and the HireLAX Apprenticeship Readiness Program are managed by Pasadena-based Parsons Corporation. The nonprofit Flintridge Center is providing recruitment and case management assistance for the program. 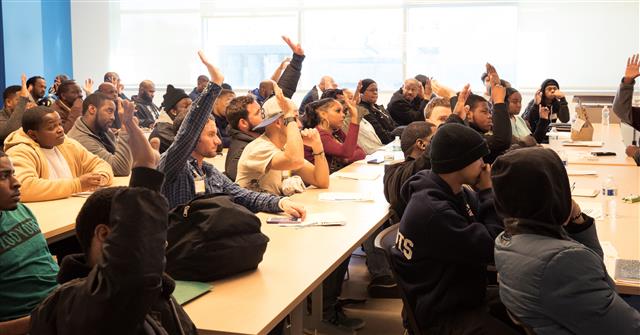 LAX is the fourth busiest airport in the world, second in the United States, and was named one of Skytrax’ 2017 Top 10 Most Improved Airports. LAX served more than 80.9 million passengers in 2016. LAX offers 737 daily nonstop flights to 100 cities in the U.S. and 1,386 weekly nonstop flights to 88 cities in 44 countries on 73 commercial air carriers. LAX ranks 14th in the world and fifth in the U.S. in air cargo tonnage processed, with more than 2.2 million tons of air cargo valued at over $101.4 billion. LAX handled 697,138 operations (landings and takeoffs) in 2016.

For more information about LAX, please visit www.flyLAX.com or follow on Twitter @flyLAXAirport, on Facebook at www.facebook.com/LAInternationalAirport, and on YouTube at www.YouTube.com/laxairport1. Information about LAX’s ongoing multi-billion-dollar LAX Modernization Program, as well as tips and shortcuts to help navigate LAX during construction, are available at www.LAXisHappening.com.