(Los Angeles, California – May 12, 2017) Another officer joins the ranks of the Los Angeles Airport Police Division, following a graduation ceremony today at the Los Angeles Police Department (LAPD) Elysian Park Academy. Officer Alexandra Hurd of Valencia, California took the oath of service and was sworn-in as the newest member of the force, made up of more than 550 proud men and women who protect Los Angeles International Airport (LAX) and Van Nuys (VNY) general aviation airport.

The former E-commerce manager and University of California Santa Barbara graduate, completed the six-month LAPD officer training academy which is academically and physically challenging. Courses cover such areas as driving, weapons training, public relations, and law. Recruits also learn Spanish, self-defense, and report writing. Hurd was recognized and awarded as top recruit in academics and tactics and won the coveted William H. Parker award for best overall recruit. The recognition comes as no surprise to her family and friends as the part time cross fit coach is a dedicated athlete who enjoys a challenge. Hurd credits her decision to join Airport Police after time spent volunteering at LAX during the Tom Bradley International Terminal Public Appreciation Day in 2013, an internship with the Los Angeles Tourism and Convention Board and spending several shifts with airport police officers.

Before swearing in the newest Airport Police Officer, Los Angeles Airport Police Chief David L. Maggard Jr. spoke to Officer Hurd and her family and said, “This is a proud moment for you and one you will never forget but it comes with great responsibilities and challenges that I am confident you will balance.” 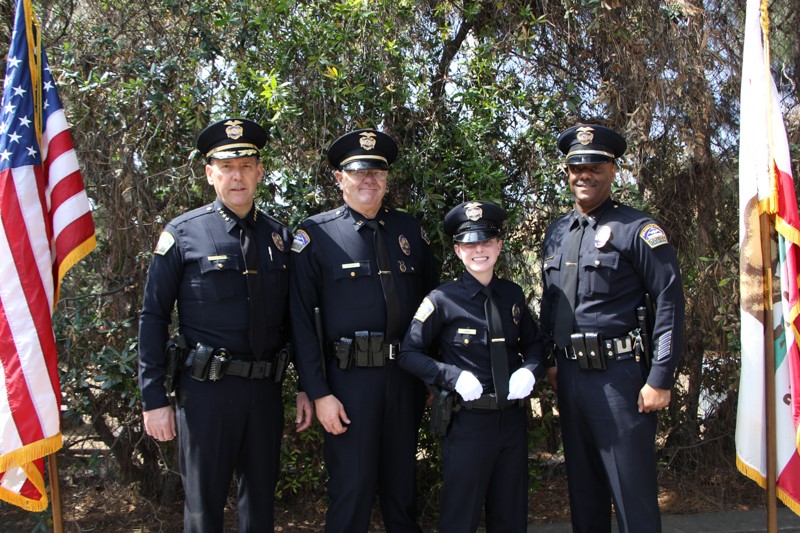