(Los Angeles, California – March 16, 2017) A Los Angeles International Airport (LAX) Security Officer was at the right place, at the right time the afternoon of March 14, 2017, and today a young man is alive because of his heroic actions.

It all happened around 2:30 p.m. inside the Tom Bradley International Terminal (TBIT.) John Solis, a 40-year old Airport Police Security Access Control Unit (SACU) officer was walking across the pedestrian bridge which leads from the international terminal security screening area, into the terminal’s great hall. Solis saw a 25-year old man throw his leg over the high pedestrian bridge railing, with the intent to fall, sixty feet to the ground below.

Security Officer Solis quickly grabbed the distraught man, pulled him from the railing, and away from the edge. The man laid on the ground and refused to speak while Solis tried to console him. Suddenly the young man leapt to his feet, threw his leg over the railing again, and tried to jump. Security Officer Solis grabbed him, wrestling him to the ground as help arrived.

Solis and his partners restrained the man until Airport Police arrived and transported him to a facility on a seventy-two hour hold under 5150 of the Welfare and Institution Code.

“Security Officer Solis, like our other employees, is constantly prepared for situations involving people who are distraught,” said Chief of Airport Police David Maggard. “I am proud of him, and all of my officer’s for their ability to balance compassion and respect as part of their response.” 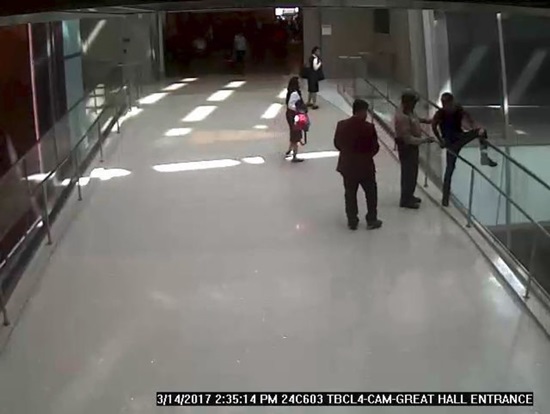