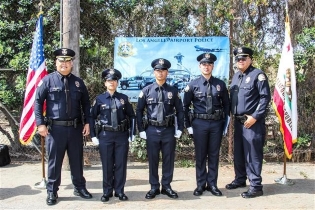 A crowd of family and friends proudly watched as LAPD Academy Class 1/19 received their diplomas. Among the forty graduates from LAPD and Port Police were three Airport Police Officers. Officer Jesse Amezcua is a Liberal Arts/Political Science Major at Los Angeles Harbor College and former personal trainer. Officer Ashley Arranga who was elected academy class treasurer, holds a Bachelor’s Degree in History from Cal State Long Beach. Officer Arranga is no stranger to LAX or to a life of serving others, having selflessly volunteered at the LAX USO for several years. Rounding out the Airport Police graduates is Officer Nikko Valdenor, a Cal State Long Beach graduate with a Bachelor’s of Science Degree in Criminal Science. Officer Nikko Valdenor will have the distinct notability of joining his father, Airport Police veteran Officer Percival Valdenor, in protecting the gateway to Los Angeles, LAX.

Before swearing-in the new Airport Police Officers, Assistant Chief Dan Llorens spoke to the graduates and said, "You join Airport Police at a very unique time in history, there are many construction and innovation projects underway and LAX is moving rapidly into the future.” “There are many opportunities waiting for you and the sky is the limit.” “Welcome to the Airport Police Family.” 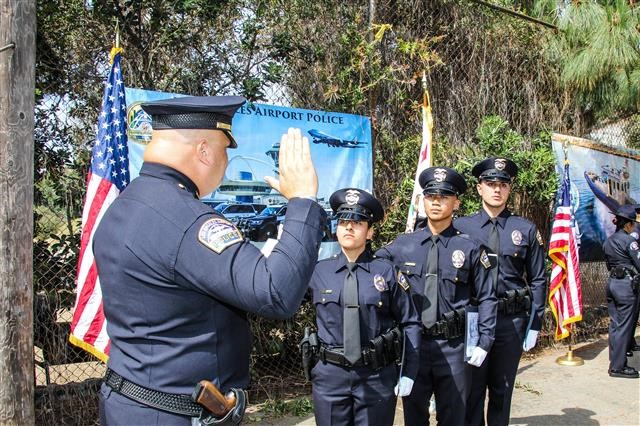