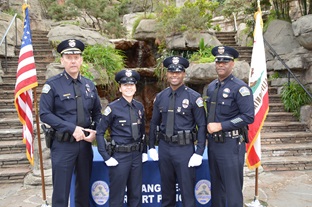 (Los Angeles, California – March 16, 2018) In a ceremony held today at the LAPD Academy in Elysian Park near Dodger Stadium, thirty-one members of LAPD Academy Class 10A-17 became the newest Los Angeles Police Officers including two new Los Angeles Airport Police Officers. Graduating officer Yesenia Alcala joins the Airport Police after serving as a coordinator for a local vocational service non-profit, working with adults with intellectual and developmental disabilities. Officer Alcala, a hometown girl, continues to give back to the community, serving the citizens of Los Angeles at LAX. Classmate Officer Anthony Evans joins the Airport Police as no stranger to the city within a city, LAX. Evans previously worked as a ramp agent for Delta Airlines where he traveled the world learning about new people and their culture. Evans not only served as the class guidon but was also awarded top recruit in physical fitness. Evans brings his dedication and work ethics to the Airport Police where he plans to be an ambassador for all law enforcement to the millions of passengers who travel through the second busiest airport in the Nation.

The two officers took the oath of office delivered by Airport Police Chief David L. Maggard Jr. who said “This is an exciting time to be an Airport Police Officer, graduating the academy is your first hurdle in a long race but the race is rewarding, there is pride and honor just in running.”

After the 1,000 hours of academy training, the two new officers will begin a six-month Field Training Program specific to aviation law enforcement under the guidance of a field-training officer before being assigned to the Patrol Services Section.