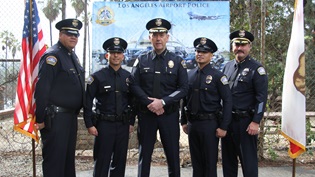 Before swearing in his new officers, Chief Maggard spoke to the graduates, their family and friends who gathered to celebrate the momentous occasion. Chief Maggard thanked everyone for their support of his new officers and said, "Today is a great accomplishment for these officers but it is just one plateau in what we hope will be a long career in the rewarding field of law enforcement."

The two new Airport Police Officers will now begin a six-month Field Training Program specific to aviation law enforcement under the guidance of a field-training officer. Upon completion, they will be assigned to the Patrol Services Section.