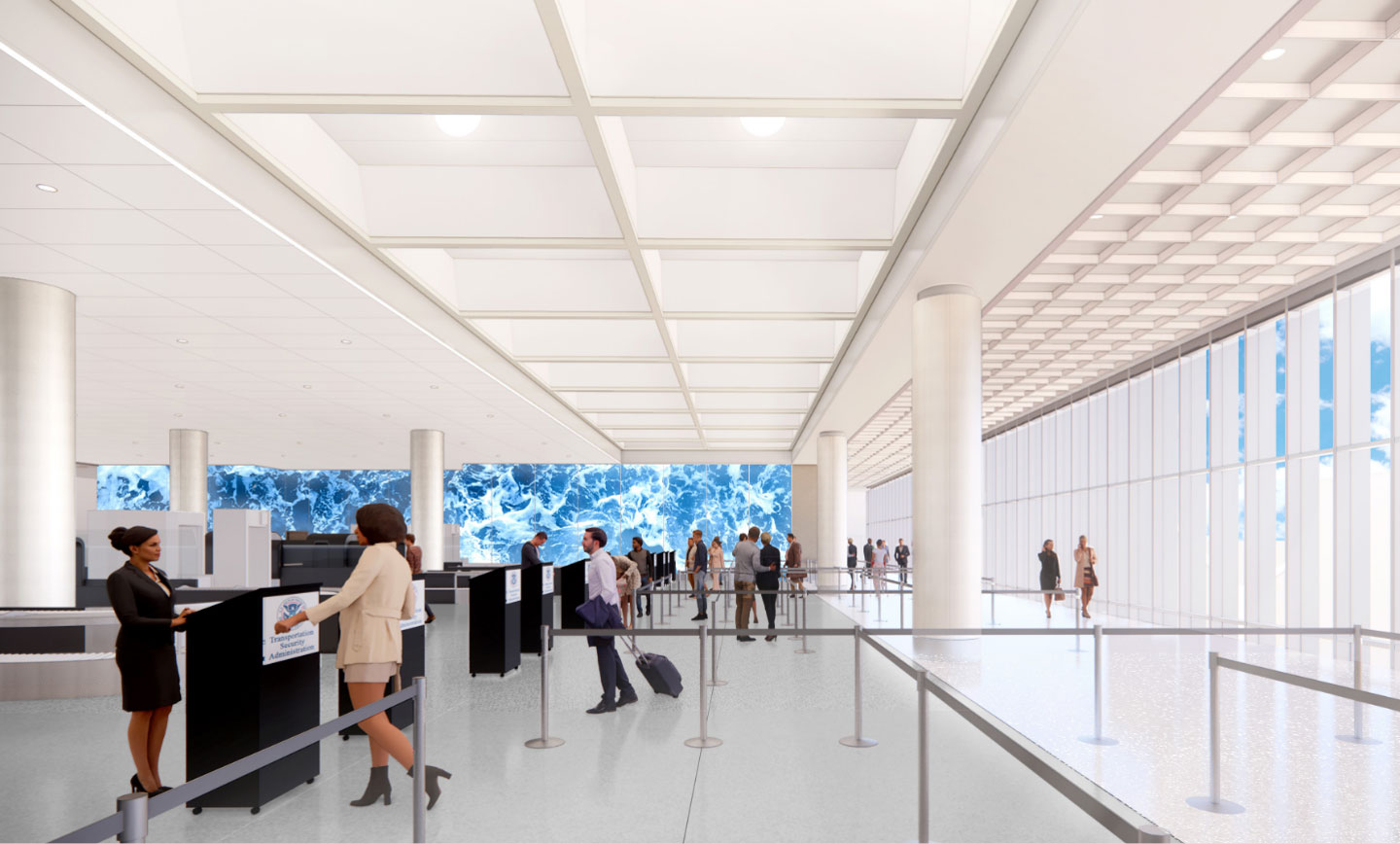 A rendering of the new TSA checkpoint for Terminal 4. 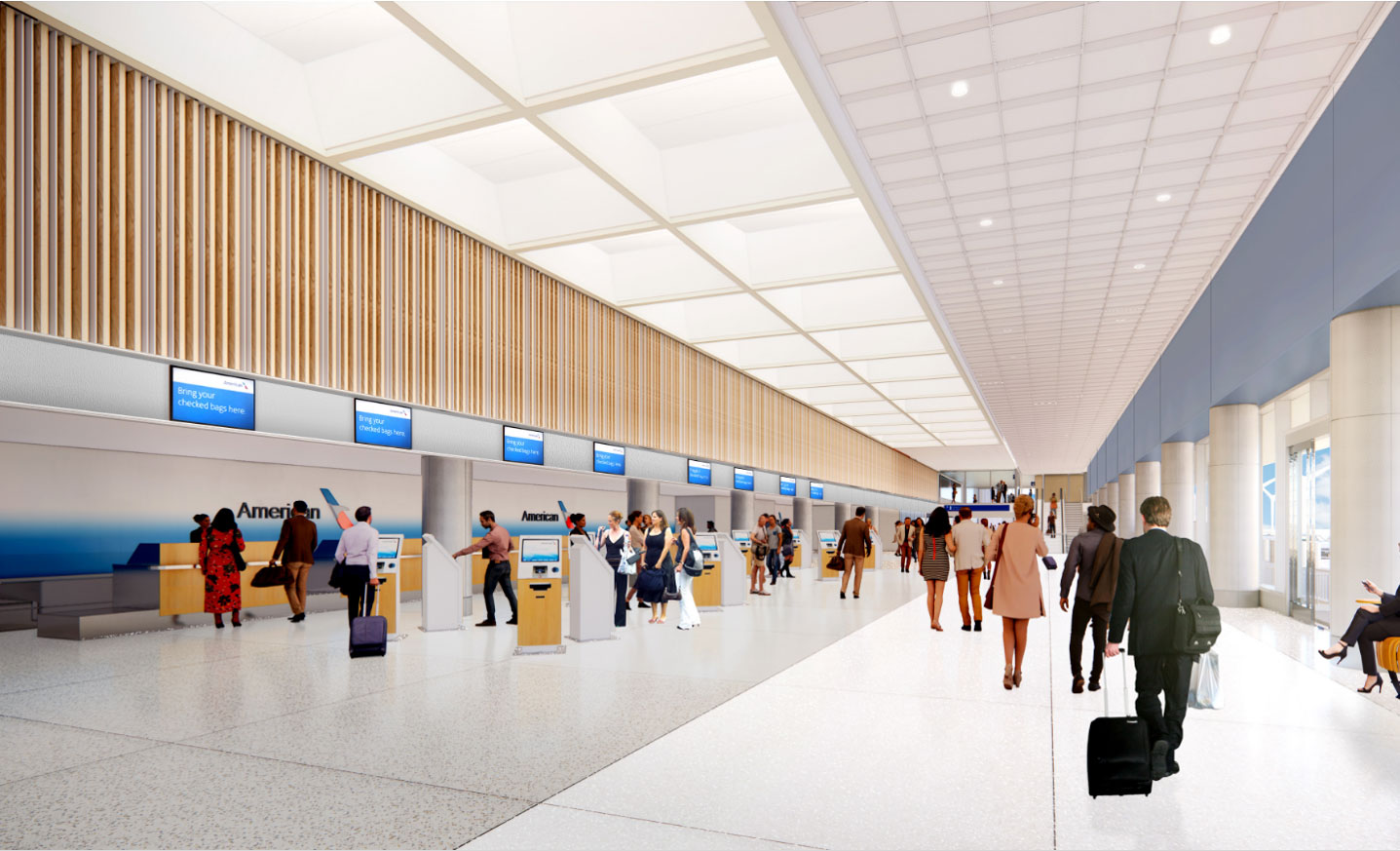 A rendering of the new ticketing lobby that will serve Terminal 4. 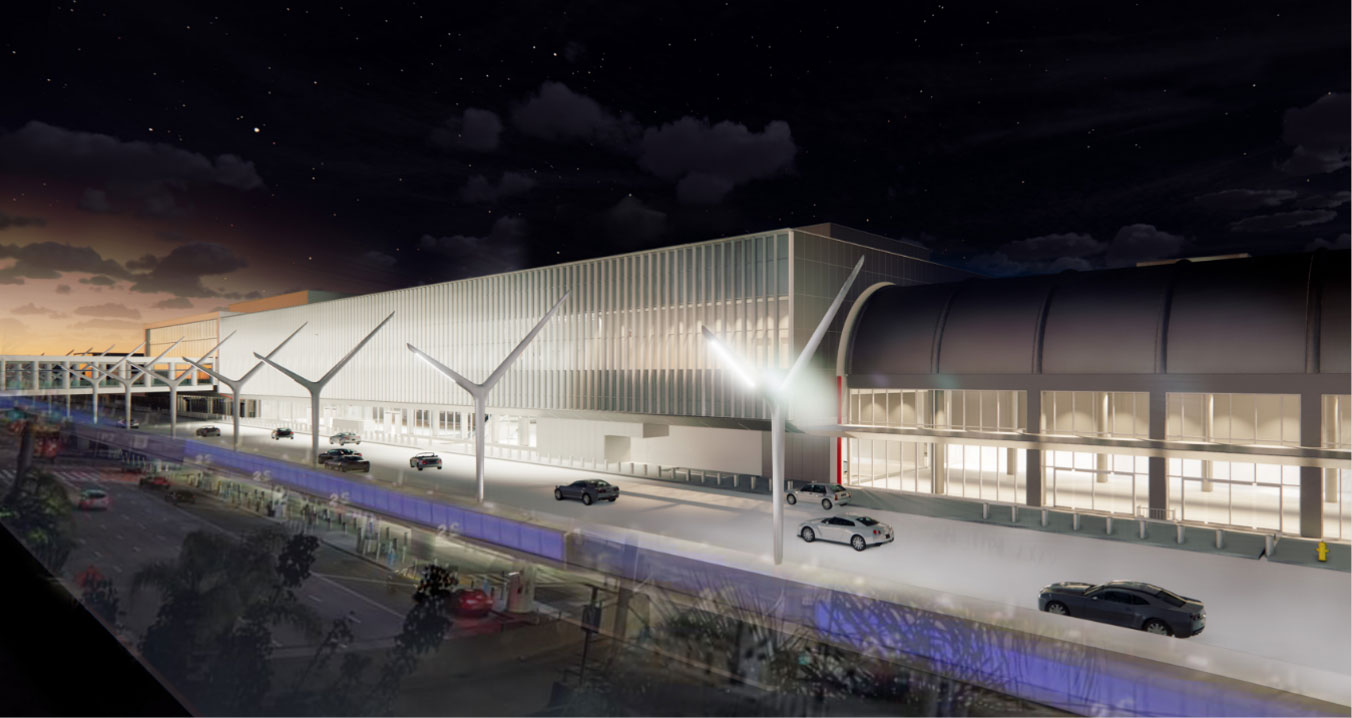 An exterior rendering of Terminal 4 and the pedestrian bridge that will connect to the Automated People Mover train system.

A rendering of the overall project scope at Terminal 4. 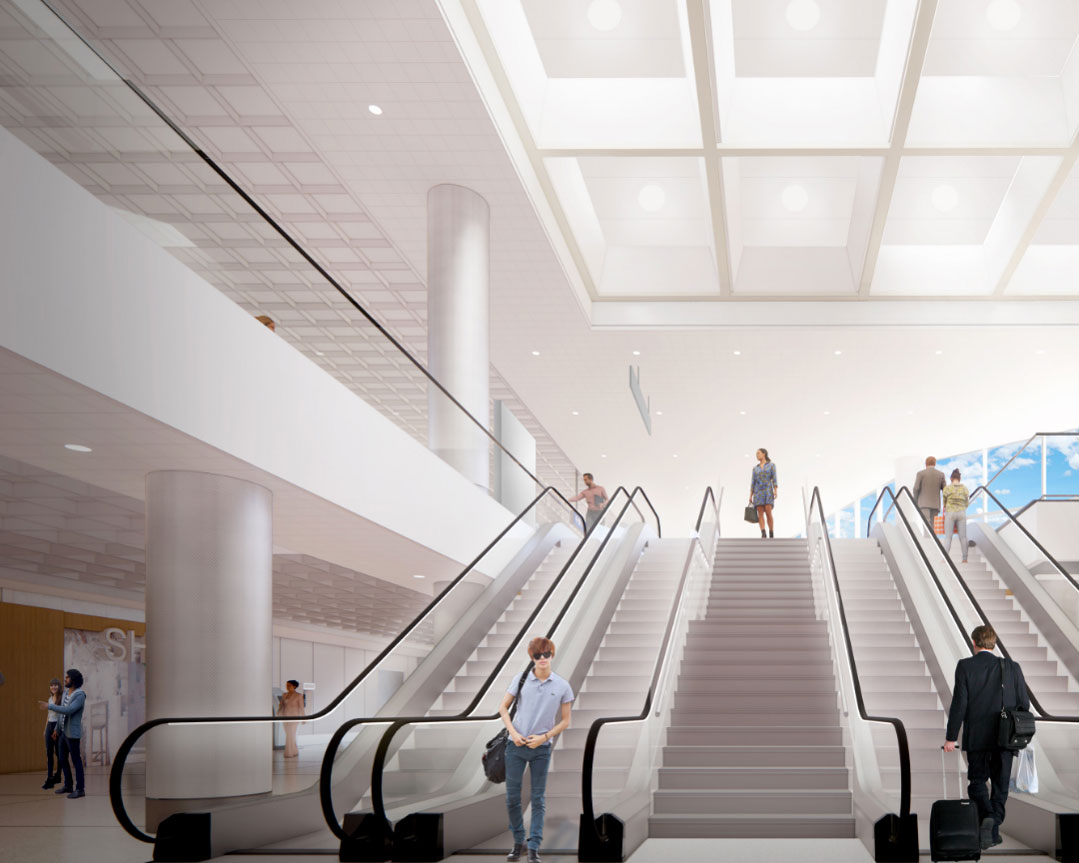 A rendering of the escalators in the vertical core for Terminals 4 and 5. 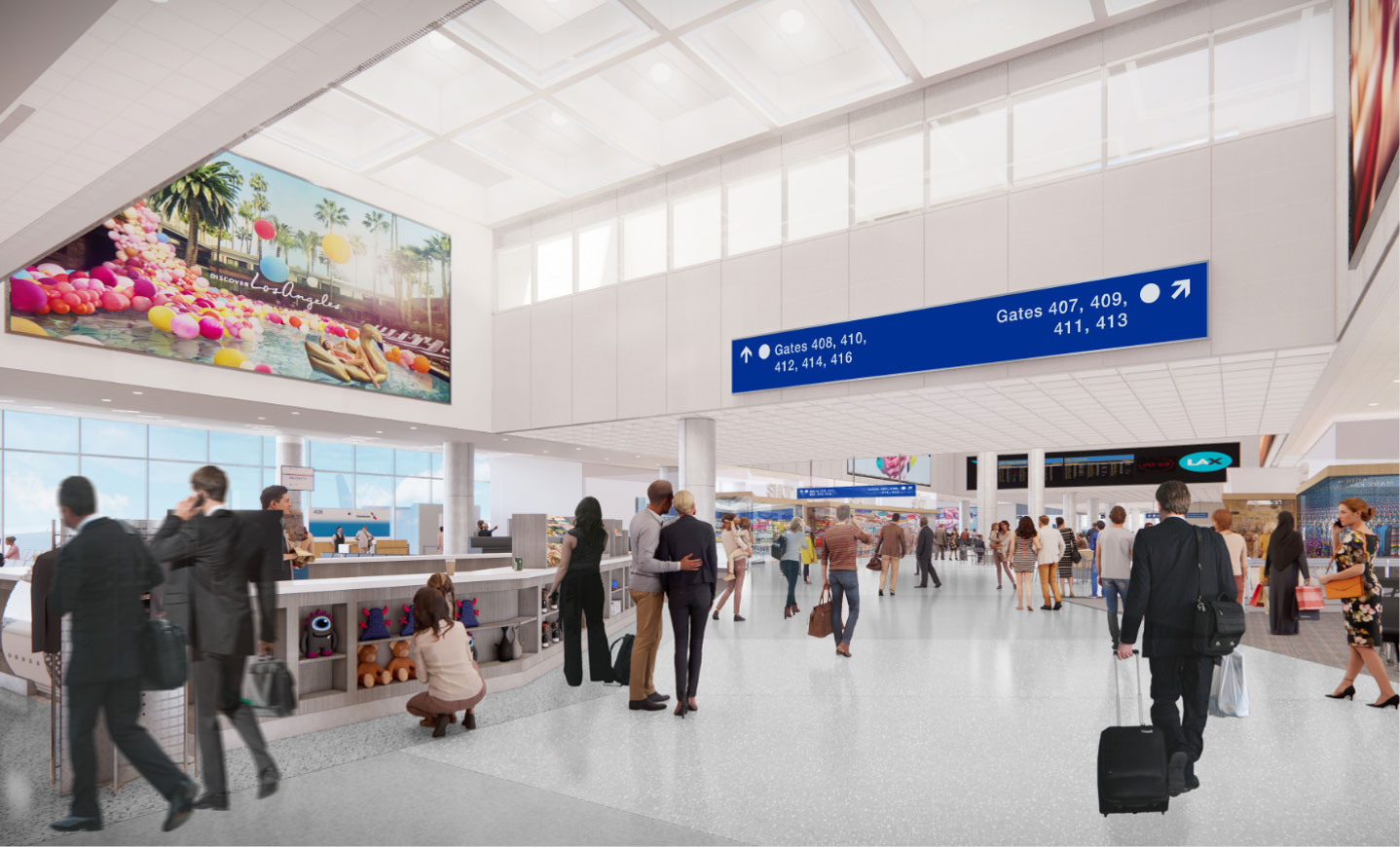 A rendering of the south concourse at Terminal 4.

A rendering of the new Terminal 4 headhouse. 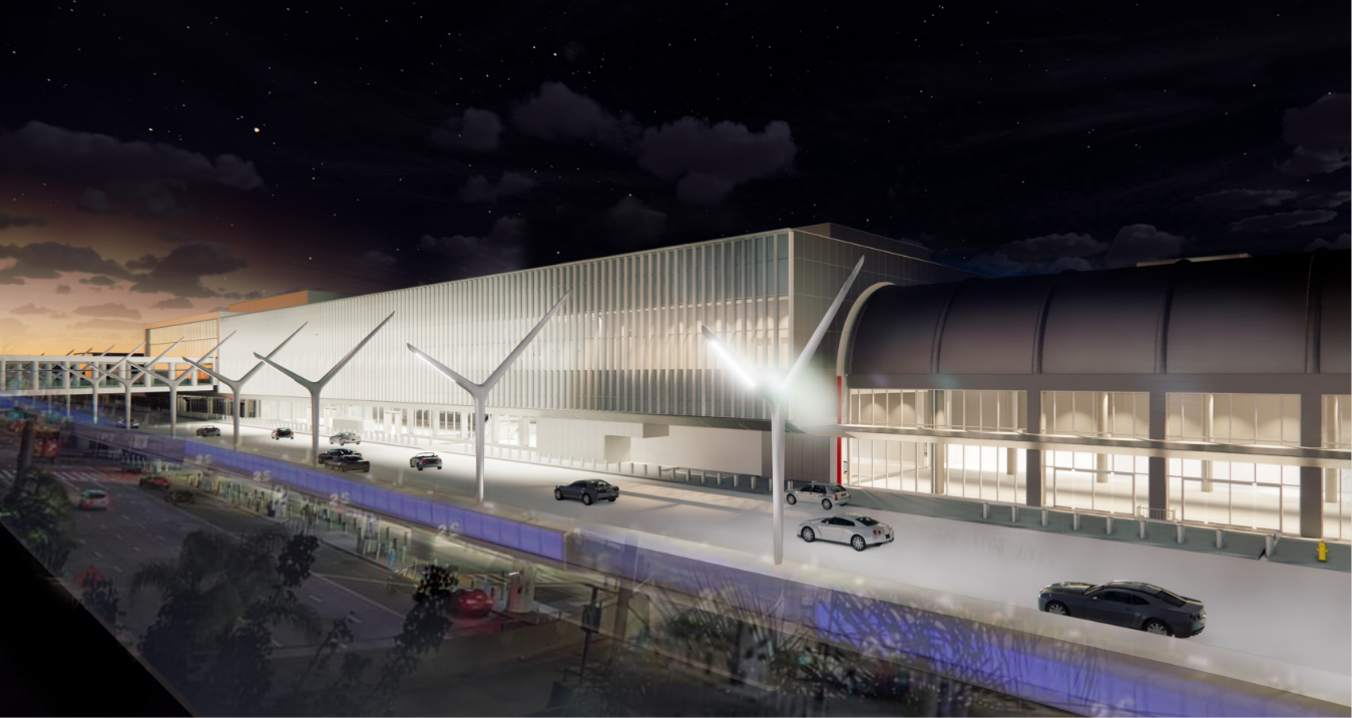 A rendering of the new Terminal 4 headhouse as seen from World Way South.

An aerial map showing the areas that are undergoing modernization at Terminal 4.

Terminals 4 and 5, home to American Airlines, JetBlue and Spirit Airlines, is undergoing a $1.6 billion modernization slated to complete in 2027 that will create a centralized location for ticketing, screening and baggage claim with enhanced amenities for guests, as well as provide direct connection to the Automated People Mover (APM) train system.

The modernization project includes a Terminal Vertical Core, which provides for vertical circulation of passengers with escalators and elevators, as well as connection to the APM’s West Central Terminal Area (CTA) station via an elevated pedestrian walkway over World Way. The Terminal Vertical Core also will include new passenger check-in and baggage claim facilities, a consolidated security screening checkpoint, a new headhouse area for passenger processing and a new post-security connection between Terminals 4 and 5.

The Terminal Vertical Core also provides office and support spaces for airlines, the Transportation Security Administration (TSA) and other law enforcement agencies. The glass curtain wall, or exterior façade of the building, complements the mid-century modern design aesthetic being incorporated on all new construction at LAX, providing a cohesive look and feel to the CTA.

A new south concourse will be constructed inside Terminal 4, featuring additional space for hold rooms, concessions, restrooms and a bus gate that will serve both domestic and international traffic. Two existing aircraft gates will also be rebuilt to support U.S. Customs and Border Protection Federal Inspection Station capability. Improvements will be made to the north concourse that will increase the efficiency of passenger movements.

Additional work includes improvements to Terminal 4 power systems, including transformers and backup power, replacement of the terminal's aircraft apron and a reconfiguration of its hydrant fueling system and underground utilities.

Highlights of the modernization include:

The modernization project is designed to earn Leadership in Energy and Environmental Design (LEED) Silver certification from the U.S. Green Building Council.

An earlier $148.5 million project completed in September 2016 included the design and construction of a multi-use, multi-level facility providing a secure connection between the Tom Bradley International Terminal (TBIT) and Terminal 4, making it easier for passengers to catch connecting flights out of different terminals. The 104,170-square-foot Terminal 4 connector is a CAL Green Certified space that also includes a Checked Baggage Inspection System, South Matrix Interline Baggage Transfer facility, and a four-lane Passenger Security Screening Check Point. The connector also includes a bus port, and a public plaza provides outdoor seating on the upper level.

As Los Angeles World Airports continues to build a better LAX, work force development and inclusivity are important components of each of its projects. For the Terminals 4/5 modernization, American Airlines has committed to achieve a goal of 20 percent of the work going to local and diverse business enterprises.