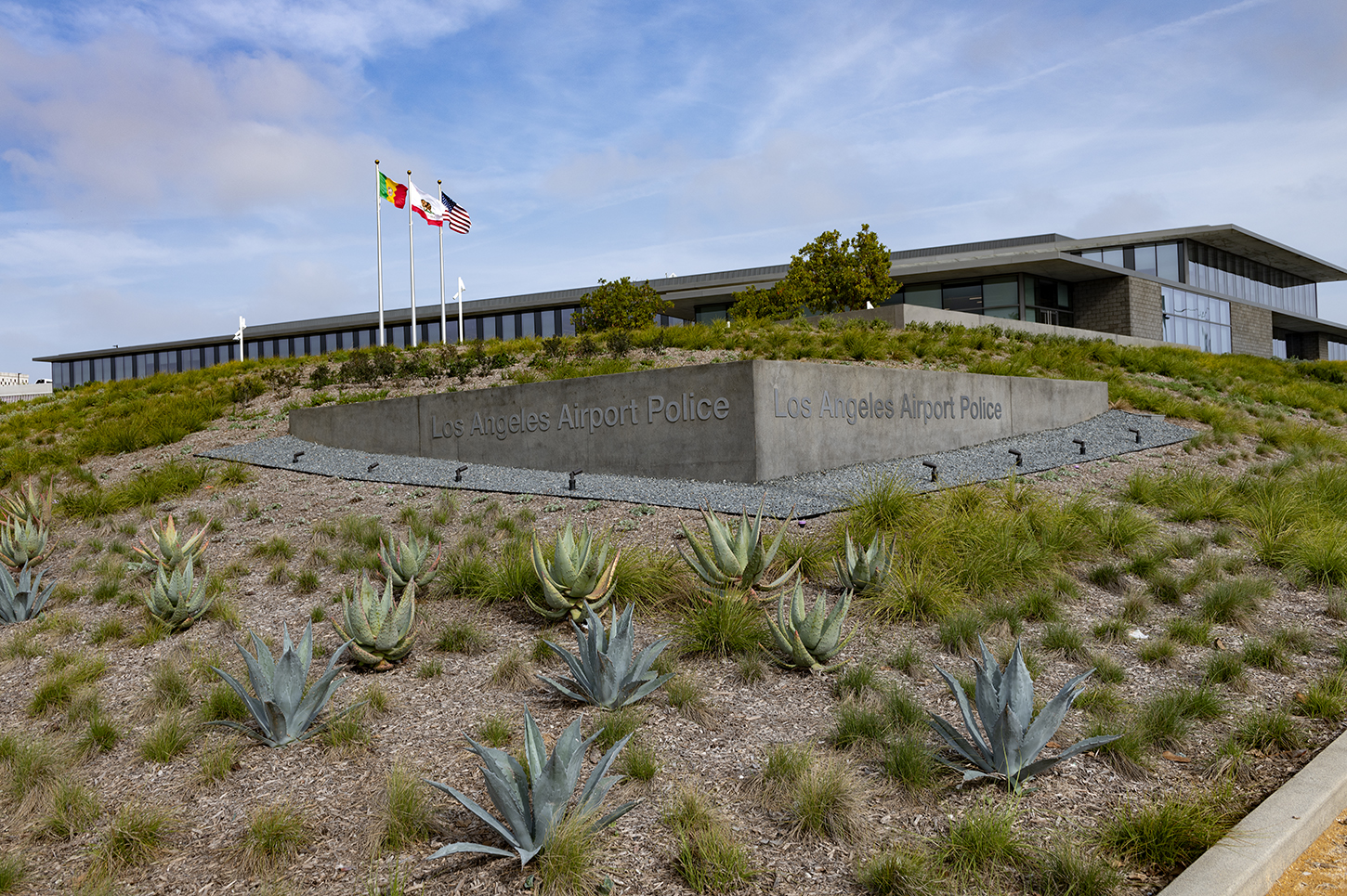 Street-level view of the Airport Police Facility, which opened in the fall of 2021. 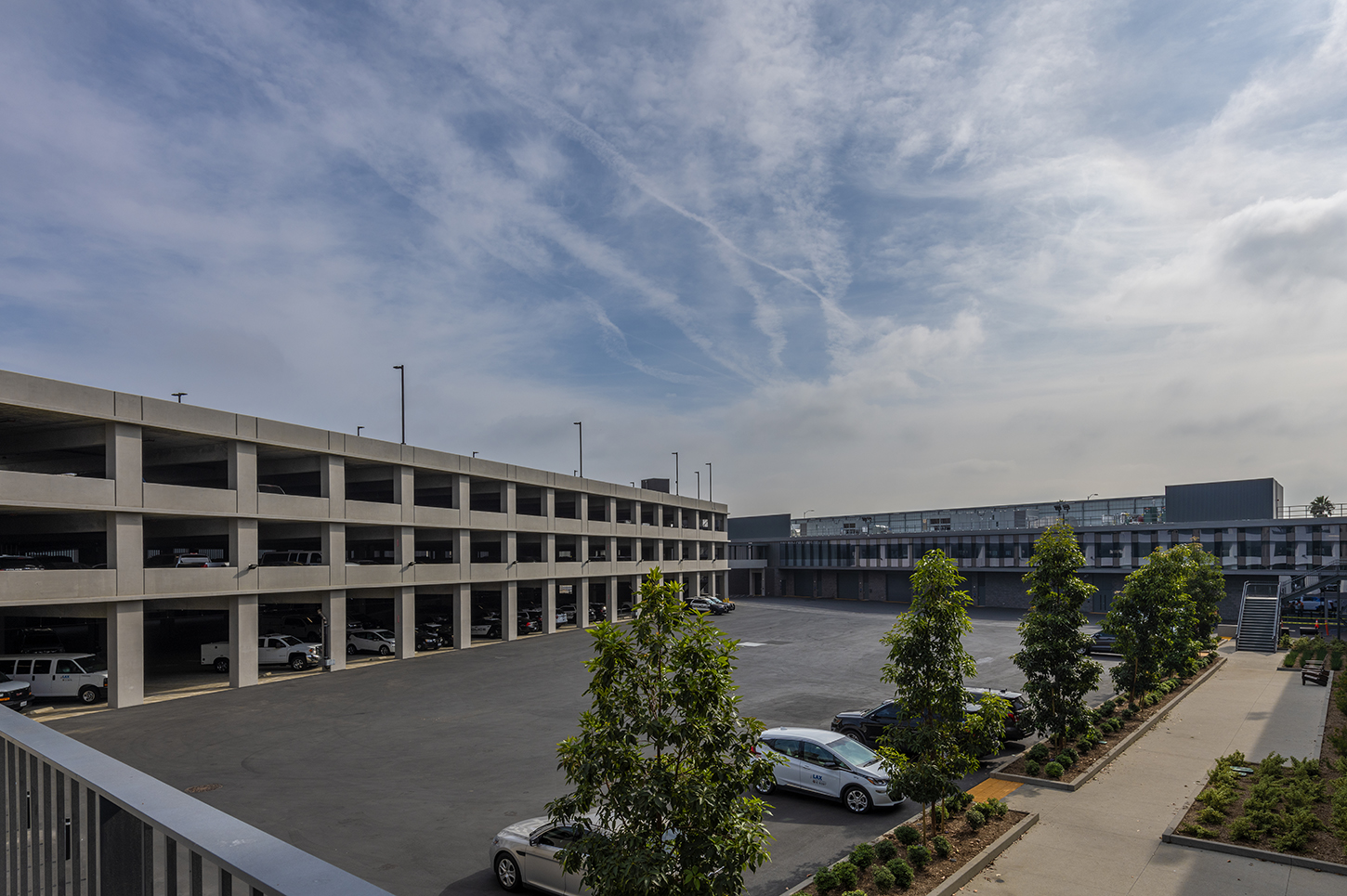 The Airport Police Facility includes a courtyard and parking structure. 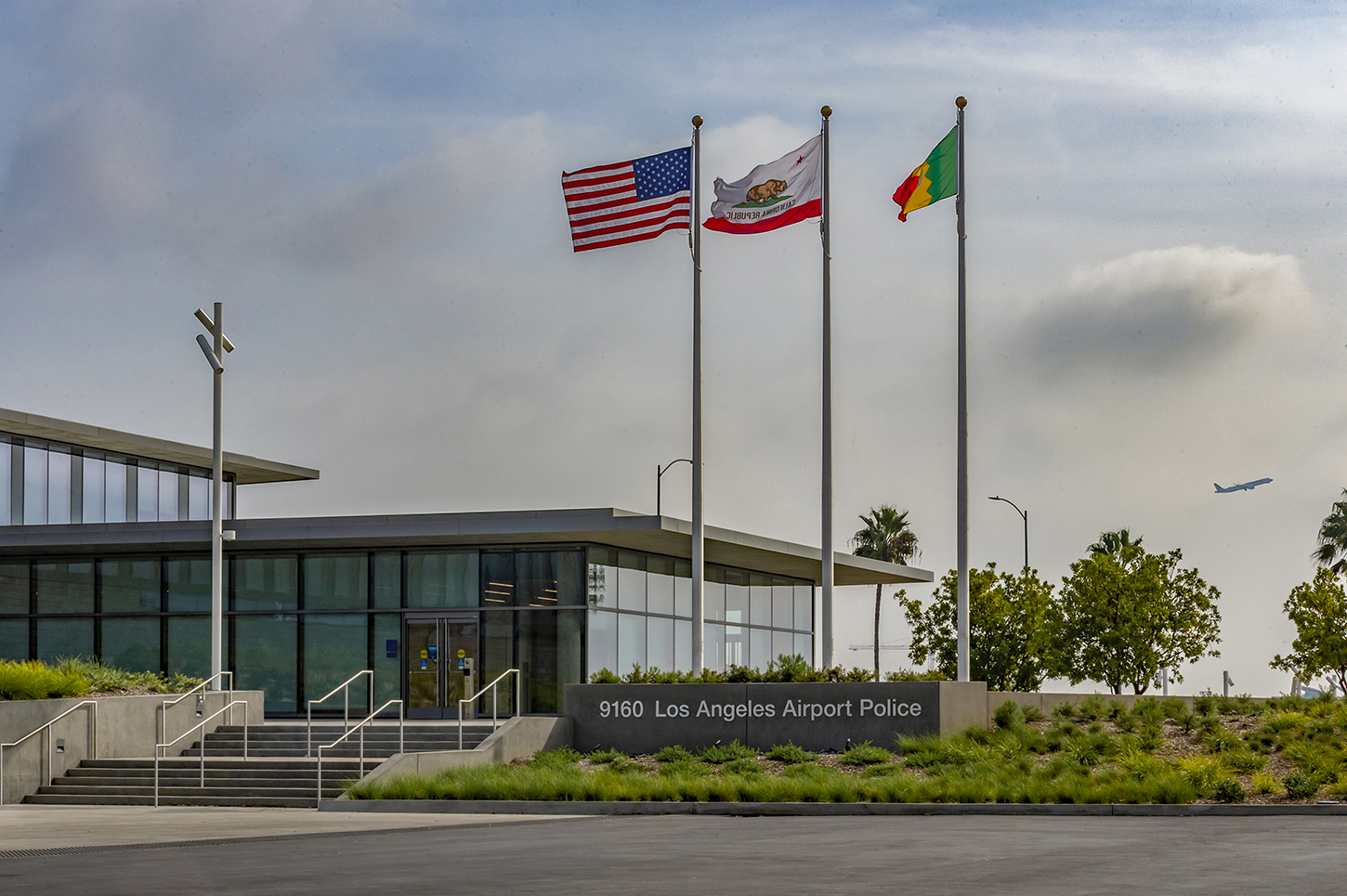 Flags fly outside the Airport Police Facility at the corner of Westchester Parkway and Loyola Boulevard. 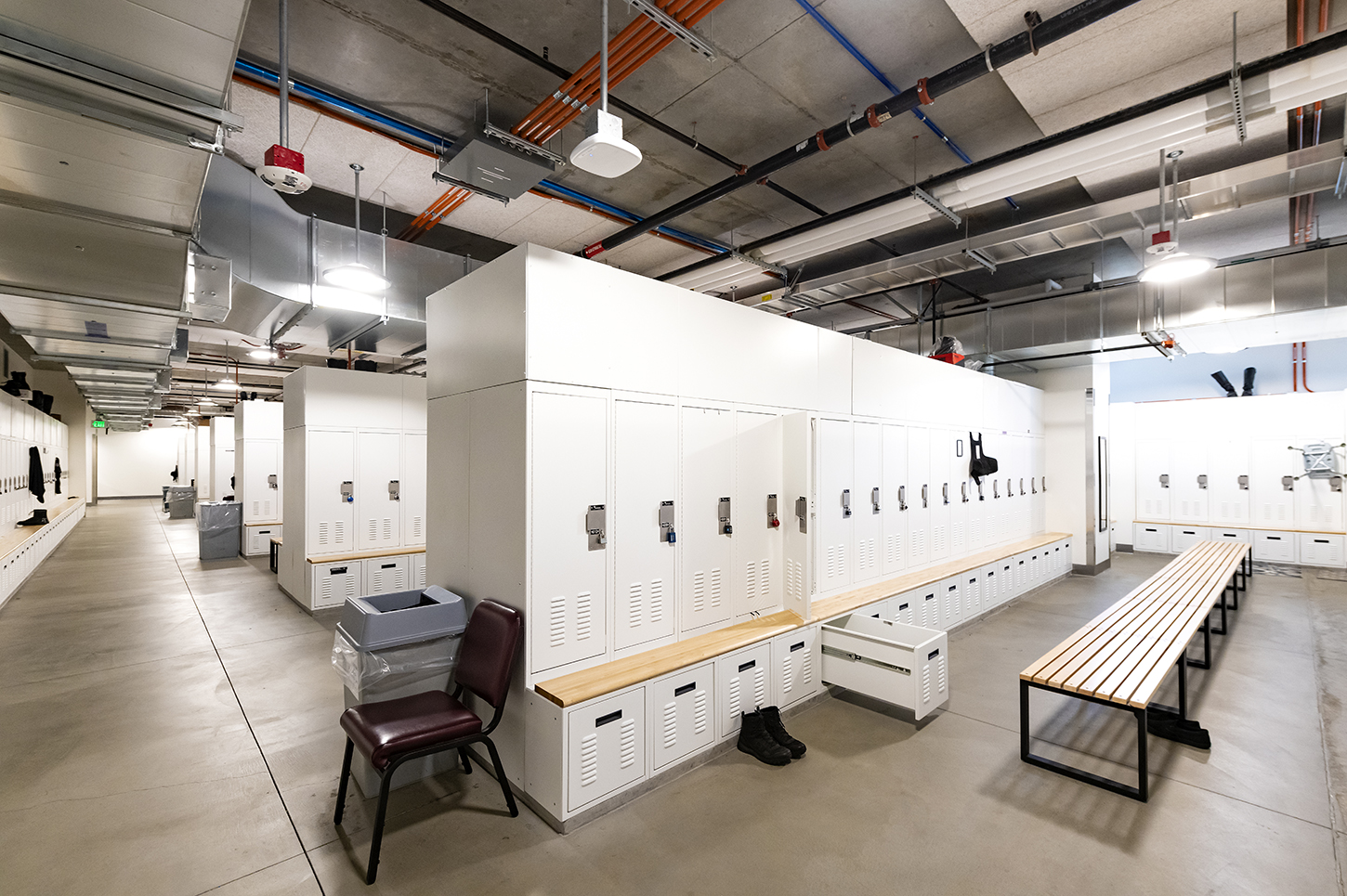 The Airport Police Facility includes a number of locker rooms for officers. 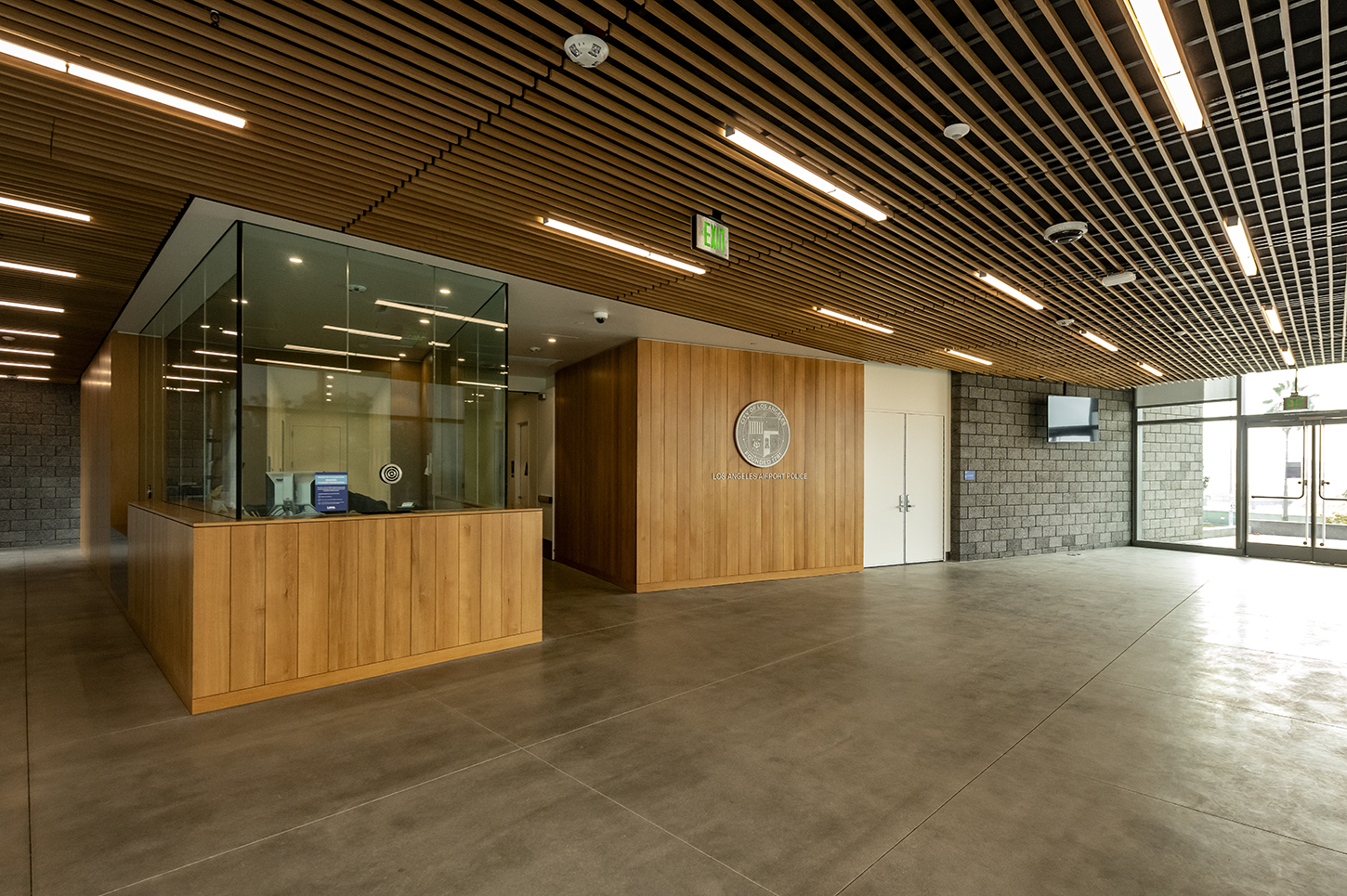 The lobby of the Airport Police Facility provides space for the public to connect with officers and access a community room to the right.

This 160,000-square-foot facility consolidates Los Angeles Airport Police (APD) operations from eight different locations, and was designed to accommodate the operations of critical police functions with the infrastructure to support the next generation of law enforcement technologies and best practices. As the hub of public safety and security, the facility houses the largest policy agency in the United States dedicated exclusively to 24-hour airport activity.

As one of the busiest airports in the world for passenger traffic, safe and secure operations are among the top priorities at Los Angeles World Airports. To better fulfill the delivery of law enforcement and safety services at our airports, LAWA is modernizing and improving the way those services are delivered.

The $220 million Airport Police Facility (APF) is a purpose-built structure designed to attain, at minimum, a Leadership in Energy and Environmental Design (LEED) Silver rating, built to CalGreen Tier 1 standards with a focus state-of-the-art construction and sustainability, including dual-piping for future recycled water use and installation of a maximum allowance-sized solar/photo-voltaic system on the headquarters building. It also includes a new 12-foot wide landscaped paseo along the south perimeter at Westchester Parkway.

Consolidation of the current police facilities was a recommendation in the 2011 Report of the Mayor’s Blue Ribbon Panel on Airport Security, with its current site adjacent to Loyola Boulevard and Westchester Parkway - just north of the LAX airfield - having been selected with the input of the community, stakeholders and Los Angeles Council District 11.

Now complete, it is one of the largest police facilities in the state, housing more than 1,100 sworn officers, security, and staff.

The facility was designed and constructed by Skidmore, Owens and Merrill (SOM) and Hensel Phelps (HP).