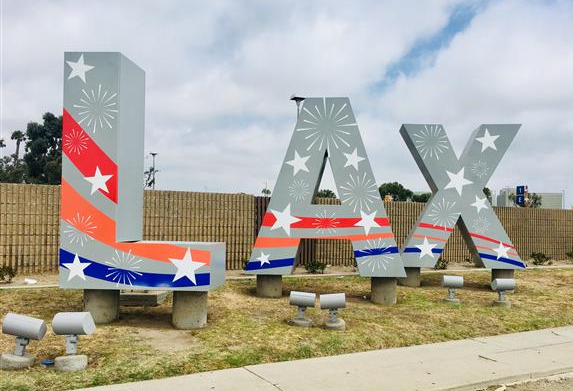 "The first week of July is typically among the busiest of the year at LAX, so we are once again asking our guests to allow extra time and be informed travelers before heading to the airport,” said Keith Wilschetz, Deputy Executive Director, Operations and Emergency Management, LAWA. “With up to an estimated 111,000 vehicles using the Central Terminal Area during the busiest times of the holiday week, it’s essential that travelers use our website or social media to check the latest traffic, TSA wait times and parking availability. We also ask our guests to allow extra time at the airport and use the Lower/Arrivals Level to help save transit time for drop-offs and pick-ups.”

With July 4 falling on a Thursday the airport considers this year’s related travel period to take place from Friday, June 28, through Monday, July 8. The five busiest days are expected to be:

Guests should plan ahead and be prepared for busy terminals and additional traffic on the roadways in and around LAX. Airport officials recommend departing passengers arrive in their airline terminals at least two hours prior to boarding time for domestic flights and at least three hours before boarding time for international flights. As well, travelers are encouraged to enroll in TSA Pre✓® and download the free Mobile Passport Control (MPC) app on their smartphone or tablet, to improve security and reduce wait times.

Airport officials emphasize that passengers should obey a federal ban on bringing fireworks of any kind on board an aircraft – either in checked luggage or as carry-on items. Because fireworks are fire or explosive hazards, these items could cause flight delays while authorities search through checked luggage and personal belongings. For a comprehensive list of items that are permitted and prohibited in carry-on or checked luggage, visit www.tsa.gov.

Los Angeles Airport Police have enhanced deployment of uniformed officers in and around LAX and Van Nuys airports. Officers will be highly visible on foot, motorcycles, and bicycles; in patrol vehicles; and managing traffic. The security and safety of passengers, visitors, and employees are the highest priorities of the entire LAX community. The traveling public is encouraged to report all suspicious activity to Airport Police at (310) 646-4268 or at (877) A-THREAT (284-7328).

Our guests will find great new concessions and a number of retail stores throughout the nine terminals, pre- and post-security. For a complete list of dining and retail locations at LAX, visit https://flylax.com/en/lax-dining-and-shopping

The public is reminded that work on LAX’s $14-billion modernization program is on-going. While construction work on parking structures, terminals and sidewalks is scheduled during late-night and early-morning hours, motorists and pedestrians should be prepared to encounter delays at all hours. When coming to LAX, passengers should look for and follow way-finding signage near all construction sites to ensure their safety and to enhance mobility.

Real-time LAX traffic conditions, parking structure availability and TSA wait times can be found on the airport’s new Twitter feed, @flyLAXstats. For information on the status and locations of airport construction, visit www.FlyLAX.com. Motorists and travelers also can receive airport-related updates by accessing the FlyLAXairport and @LAAirportPD Twitter feeds.

Motorists can take advantage of the typically lighter traffic on the Lower/Arrivals Level where they can access the parking structures or drop off passengers who can then use elevators or escalators to reach the Upper/Departures Level. Guests are encouraged to check with their airline before arriving at the airport to ensure that they go to the correct terminal. Motorists can make use of East Way and West Way on the Lower/Arrivals Level to reduce their time on airport roadways.

Rather than circling the Central Terminal Area until arriving passengers reach terminal curbside for pick up, motorists can park and wait up to two hours free at the LAX Cell Phone Waiting Lot at 96th Street and Vicksburg Avenue. Parking is also free for the first 15 minutes in the eight Central Terminal Area structures, making them an ideal place to drop off or pick up passengers. 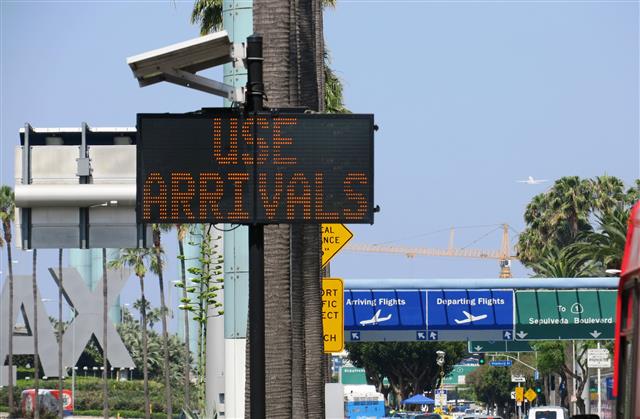 Motorists can save time by using the Lower/Arrivals Level to drop off passengers, who can then use elevators or escalators to reach the Upper/Departures Level.