LAWA TO EXPAND LAX-IT BY 50% ON WEDNESDAY MORNING

Adding three lanes through the expansion of the lot means additional room for guests and vehicles, while maintaining operations

(Los Angeles, CA) As Los Angeles World Airports (LAWA) continues improving the LAX-it experience and reducing wait times in its first week of operations, airport officials announced the lot will be expanded by 50 percent on Wednesday. Construction began last Thursday and was successfully completed Sunday. The extension of the LAX-it lot will open at 3 a.m. on Wednesday, Nov. 6, increasing the space for cars and guests in the lot by approximately 50 percent. The expansion is directly adjacent to the current lot and the shuttle bus system remains the same. The expansion was a pre-planned contingency to allow quick response to changed traffic patterns and behaviors from LAX-it. LAX-it is necessary to accommodate construction of the permanent fix to traffic at LAX, the world’s fourth busiest airport.

LAWA has continuously analyzed trends and key metrics to identify areas for improvement, and this latest move builds on a series of adjustments that have been implemented since LAX-it launched last week.

The swift implementation of this expansion is the result of extensive collaboration with Lyft, taxis and Uber. Beginning Wednesday morning, Lyft’s operations will move entirely to this new LAX-it expansion lot while Uber will add the former Lyft space to its current operating space. Wednesday morning was chosen as the opening date at the request of Lyft to ensure their operations are ready to go when the expansion area opens. Taxis will also receive additional space for passenger and car queuing. Opoli will remain in its current location. LAWA is hopeful that this will allow the ride app companies to more consistently supply cars and drivers.

LAWA will be adding signage at the expansion of LAX-it to help guests find their ride and, as always, staff will be on site to help guests safely and efficiently navigate the lot. LAWA also will be working with Lyft and Uber to ensure their riders and drivers are well informed.

During the first six days, average LAX-it shuttle headways were three to five minutes, with travel time from curb to lot taking on average 10 minutes or less. Guests are also experiencing reduced wait times for ride app vehicles for non-peak hours, with the majority of guests waiting less than 10 minutes for a ride app vehicle during non-peak hours. Taxi wait times have stayed consistently low, with few exceptions.

LAWA has and will continue to adjust the operation. From extensive peer reviews of other airports who have implemented similar changes, LAWA has been prepared to make structural adjustments as needed and as a result has added additional shuttles, dynamic staffing, adjustments to traffic routes, and better wayfinding and signage. LAWA is also encouraging our partners to supply the cars to meet the demand for rides.

LAWA launched LAX-it the same week that it began construction in the Central Terminal Area (CTA) on the foundation of the Automated People Mover (APM) train, which will radically reduce traffic at LAX when it opens in 2023. Its construction, and other construction projects at LAX, will lead to the closure of 30 percent of the inner curb lane and impacts from construction vehicles, equipment, and personnel which will be ramping up significantly. LAWA evaluated numerous options to prevent construction causing long term multi-mile gridlock in an around the airport. LAX-it is designed to help mitigate those impacts until the APM is operational.

During peak times Sunday evening, traffic in the CTA and to LAX from the 105 and 405 freeways and Howard Hughes saw significant improvement over the previous Sunday evening, even though there were 1,500 more passengers this week than at the same time last week. Throughout the week, speeds on the upper and lower levels of the CTA were improved over the previous week and roughly 15 percent of the vehicles, or 115,000 total vehicles, were taken out of the upper and lower level roadways.

LAWA will continue to make swift adjustments in real-time to ensure LAX-it is as smooth of an experience as possible. 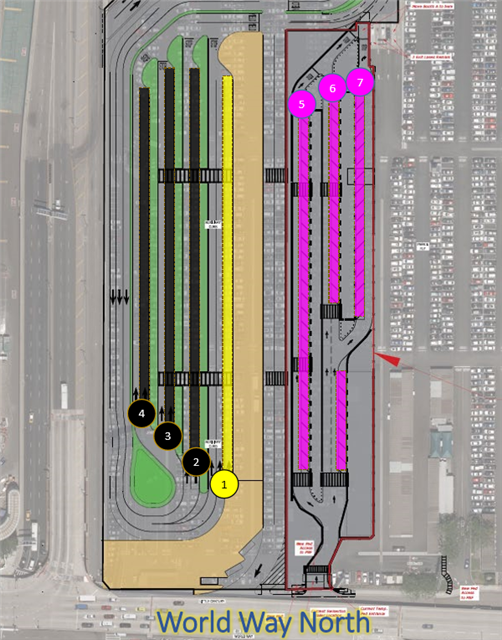 The LAX-it ride app and taxi pickup lot has been expanded by 50%. The new sections, shown in pink above, open at 3 a.m. Wednesday to provide additional operating space.