“We are building the world-class airport travelers need and deserve — and the Consolidated Rent-A-Car facility groundbreaking demonstrates how we’re keeping this promise,” said Mayor Garcetti. “Our city is doing so much more than building a parking structure — we are making an investment that will improve the traveling experience, reduce congestion in surrounding neighborhoods, and create middle-class careers for years to come.”

Since taking office, Mayor Garcetti has led a more than $14 billion transformation of LAX that began in 2009. Mayor Garcetti’s historic infrastructure investments have strengthened working families and the middle class. Under his leadership, unemployment has been cut in half while close to 200,000 new jobs have been created. Construction of the ConRAC is expected to create more than 1,000 jobs. 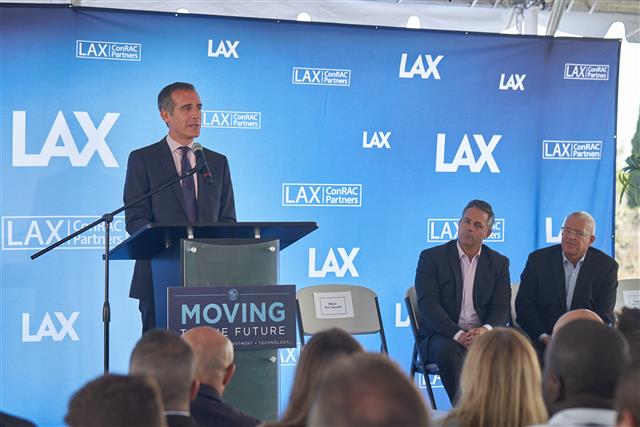 Reducing congestion at LAX — as well as in surrounding communities — is at the heart of the ConRAC project. The consolidated facility will completely remove rental car shuttle traffic from the Central Terminal Area (CTA), which equates to 3,200 shuttle trips per day. The removal of the shuttles will improve traffic on the roadways and free up critical curbside boarding space in the CTA.

"This is a big step toward LAX becoming a world-class airport for travelers and a first-class neighbor to Westchester and Playa del Rey," said Councilmember Mike Bonin. "Especially once it is connected to the new Automated People Mover, this new Consolidated Rent-A-Car Facility will reduce the number of shuttles and vans navigating the Central Terminal Area and nearby neighborhoods, improving both local traffic and air quality. That is a big win and exciting progress to celebrate."

"This has been a momentous year for LAX," said Councilmember Joe Buscaino. "LAX continues to move full steam ahead with its $14 billion investment to create a fully transformed airport of the future. The ConRAC is just one of the many groundbreakings held this year which highlight the efforts LAX is making to improve passenger experience which increases tourism and improves our local economy."

As the second largest rental car market among domestic airports, the ConRAC will improve and streamline the car rental process at LAX. The facility will be built with an eye to the future and designed to accommodate new and emerging vehicle types such as autonomous vehicles. Additionally, movable concrete barriers will allow for the quick reallocation of space as rental car companies’ market shares shift.

The ConRAC is an important component of the Landside Access Modernization Program (LAMP), which also includes an Automated People Mover train that will connect travelers directly to airport terminals and create new and convenient locations for passenger pick-up and drop-off outside the Central Terminal Area. Once completed in 2023, the APM will connect with L.A. Metro's light rail system.

Rendering of the ConRAC Facility at night.

“The ConRAC Facility will provide a rental car experience worthy of a world-class airport,” said BOAC President Sean Burton. “This project doesn’t just benefit those renting cars — it benefits the local economy and community through the creation of 1,000 jobs and by relieving vehicle congestion on the roads in and around LAX.”

“We are future-proofing everything we build at LAX,” said Deborah Flint, CEO, LAWA. “Every project under construction or on the drawing board will meet our needs now and be capable of adapting to new technology and demands. The ConRAC Facility is a prime example of how to future-proof so we can protect our investments.”

On October 26, 2018, the Los Angeles City Council approved an approximately $2 billion public-private partnership between LAWA and LAX ConRAC Partners (LAXCP), with LAXCP designing, building, financing, operating, and maintaining the facility for a 28-year period. LAXCP has committed to 30% local hiring, which exceeds local hiring requirements, and together with LAWA is developing opportunities for local small businesses. LAXCP has also agreed to sponsor 100 new, local apprentices and feature all-union labor on the ConRAC facility.

“Collectively, the LAXCP team has extensive experience designing, building, and operating nearly 30 ConRACs domestically and internationally,” said Karl Schaefer, LAXCP Project Executive. “We are proud to use our shared know how to help LAWA create a top tier experience for the traveling public at LAX while we honor our commitment to provide local hire economic opportunities and environmental sustainability.”

Mayor Garcetti has made sustainability a priority of his administration. The ConRAC facility is designed to reflect Los Angeles’ standing as one of the world’s leading sustainable cities and will include native drought-tolerant landscaping, reclaimed water usage, more than 200 Level 2 electric vehicle chargers, and a solar farm generating over 8,400 megawatt hours annually. 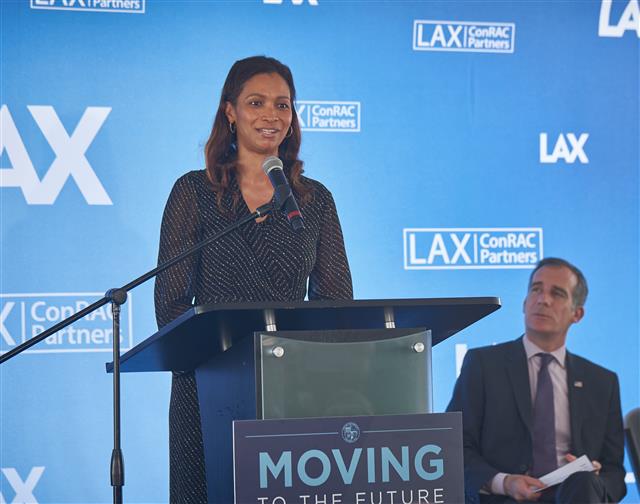