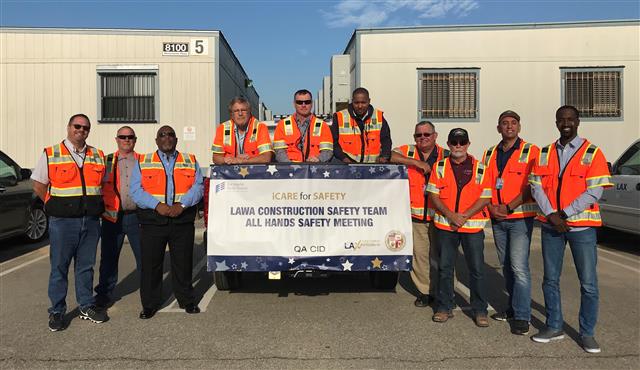 (Los Angeles, CA) The $14.3 billion modernization at Los Angeles International Airport (LAX) was already the largest public works program in the history of Los Angeles, and now it’s also one of the safest, with no lost-time incidents over the last year of construction work at the airport.

"Safety is at the core of everything we do at Los Angeles World Airports, and as we lead the nation in modernizing our facilities it’s more critical than ever that we hold ourselves and our contracting partners to the highest standards to protect our passengers and employees,” said Deborah Flint, Chief Executive Officer, LAWA. “As of August, we have more than 2,500 women and men working on construction projects at LAX, and our exceptional safety record shows their dedication to building the future of this airport in the safest ways possible.”

Over the past five years, Los Angeles World Airports (LAWA) has performed exceptionally well on two industry-recognized benchmarks. LAWA’s Lost Time Incident Rate of 0.14 and Total Recordable Incident Rate of 1.07 exceed LAWA’s ambitious goal of one-third of the national average (1.3 and 3.5) for these key rates. The OSHA Lost Time Case Rate is calculated by multiplying the number of recordable cases that contained lost work days by 200,000, and then dividing that number by the number of labor hours at the company. The Recordable Incident Rate is a similar calculation, only it uses all incident cases, not just those with lost work days.

Leading this success is a team of assistant safety managers supported by a robust group of construction inspectors who enforce safety and security within active construction zones, in addition to ensuring compliance with construction quality requirements.

LAWA’s Construction Safety Program sets additional standards that go over and above those established by the California Division of Occupational Safety and Health and the contractors' site-specific Injury and Illness Prevention Program (IIPP), which is a proactive plan to find and fix potential hazards before workers are hurt.

Contractors working on LAWA projects are required to send representatives to a monthly all-hands meeting. The informative, hour-long meeting is led by the LAWA Program Safety Manager. A typical agenda includes discussion of any incidents and lessons learned, updates on the construction and safety programs, and access to representatives of different equipment vendors or utility companies who can talk about new safety features and best practices. A representative of the Occupational Safety and Health Administration (OSHA) Training Center at California State University Dominguez Hills is on hand bimonthly to provide no-cost training.

Since 2014, LAWA has maintained an online safety training program where members from the LAWA project management teams, project managers, construction managers, and construction inspectors are required to participate in a monthly online safety training and quiz. LAWA provides a 10-hour OSHA training class for contractors and airport staff each month. LAWA’s safety staff hold professionally recognized Certified Health & Safety Technician (CHST) certification or higher from the Board of Certified Safety Professionals. LAWA also has a training program for construction inspectors who start at the Assistant Inspector position, a trainee level classification, and over the course of 2.5 years become qualified for full duties.

Monthly all-hands safety meetings draw representatives of contractors from all of LAWA's projects.