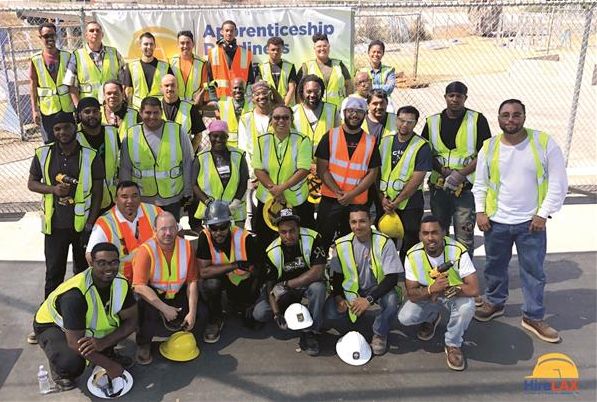 (Los Angeles, CA) The HireLAX Apprenticeship Readiness Program graduated its sixth cohort on Friday, with 25 students ready to take the next step in their construction careers after successfully completing the intensive eight-week program taught at Los Angeles Southwest College (LASC).
"Programs like HireLAX are critical to helping residents access quality union jobs and create pathways into the middle class,” said Los Angeles City Councilmember Marqueece Harris-Dawson, District 8, who spoke at the graduation ceremony. “Congratulations to the 25 graduates for working diligently and preparing themselves to step into construction careers. Many of these students have experienced homelessness or involvement with the criminal justice system and need opportunities like these to find stability. Thank you LAWA for working with me to prioritize the career development of qualified candidates representing communities like South LA.”

“Thank you so much to Mayor Garcetti, the Los Angeles City Council, our county supervisors and Los Angeles World Airports for their leadership in collaborating with the Los Angeles Community College District’s Southwest College to help train our students and local residents with great construction jobs," said Mike Fong, Member, LACCD Board of Trustees, who also spoke at the graduation ceremony. "This valuable partnership is providing an important career pathway for students who receive in-demand skills training at Southwest College together with on-the-job apprenticeships at LAX that lead to jobs and careers in the construction industry.”

“Through our HireLAX program we have now placed more than one hundred graduates in jobs helping build the future of LAX through a career in the construction trades,” said Justin Erbacci, Chief Operating Officer, Los Angeles World Airports (LAWA). “Los Angeles World Airports appreciates the collaboration of its many partners who make HIreLAX possible and we congratulate the newest graduates on this life changing accomplishment.”

“With the boom in construction all across the United States, many organizations are complaining of worker shortages,” said Ron Miller, Executive Secretary, LA/OC Building Trades Council, who spoke at the graduation. “In partnership with LAWA, the LA/OC Building Trades are proud to provide men and women from the local community a pathway to good, middle-class careers in the unionized, skilled Trades. We welcome them to our family of the affiliated local unions of the Building Trades.”

Upon graduation, LAWA coordinates employment opportunities with its construction contractors and facilitates entry into the apprenticeship programs affiliated with the construction unions signatory to the LAWA Project Labor Agreement. More than 70 percent of graduates from previous classes have already started their construction careers at LAX or other nearby projects.

This sixth cohort includes 12 graduates who live in the Airport Impact Area, communities closely surrounding LAX, with the remaining 13 from elsewhere in the City of Los Angeles. This cohort includes:


The HireLAX program was developed within the framework of LAWA’s Project Labor Agreement, which is a partnership between LAWA, its contractors and the local construction unions. The agreement requires contractors and unions to refer local workers to the project and to conduct outreach to persons who have not previously qualified to be employed on construction projects, especially minorities and women. A substantial proportion of students who participate in the HireLAX program have experienced hardship, including homelessness or involvement with the criminal justice system.

Sixty percent of the graduates in the sixth cohort are African American and 40 percent are Hispanic/Latino. Forty percent have had prior involvement with the criminal justice system.

Contractors performing work on LAWA projects must meet or exceed 30 percent local participation with a workforce that reflects the diversity of Los Angeles. The HireLAX program trains local residents to earn these jobs. Under the HireLAX framework, program graduates will be connected with union apprenticeship programs and contractors, so they can begin their construction careers at LAX. For example, there are multiple craft positions contractually earmarked for HireLAX graduates on the LAX Automated People Mover and Consolidated Rent-A-Car Facility projects, which are part of the LAX Landside Access Modernization Program

The LAWA Project Labor Agreement and HireLAX are managed by Pasadena-based Parsons Corporation.

A short video that highlights the incredible impact HireLAX has on its graduates can be viewed here. Questions about the program can be emailed to hirelax@lawa.org. 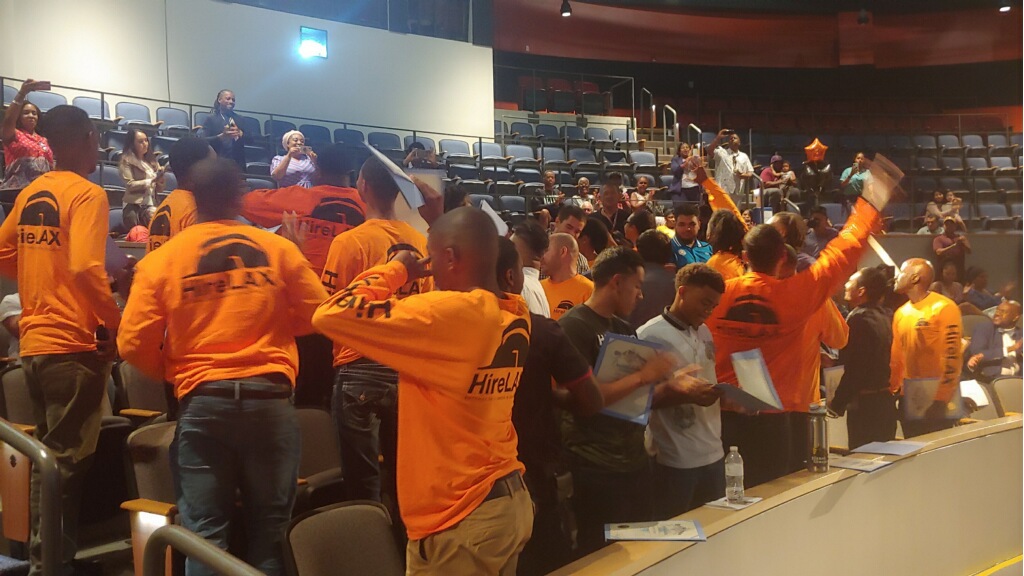 Members of the sixth HireLAX cohort celebrate following their graduation on Friday morning.