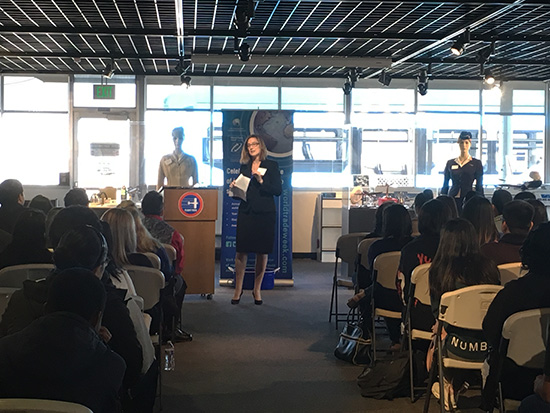 (Los Angeles, CA) Nearly 100 high school students from all over Los Angeles arrived at Los Angeles International Airport (LAX) this morning for an up close and personal look at international trade at the nation’s second-busiest airport. The event ispart of an ongoing education series coordinated by World Trade Week (WTW) Education Committee and International Trade Education Programs (ITEP).The day includedan airfield tour and a visit to Delta Air Lines’ cargo facilities, as well as having the students work with mentors from the Los Angeles Air Cargo Association and Customs and Border Protection to apply their problem-solving skills to cargo-related scenarios.

“Connecting people, places, and cultures is the mission that drives everything we do at LAX, and cargo is a vital part of completing that mission,” said Los Angeles World Airports (LAWA) Deputy Executive Director for External Affairs Trevor Daley. “I want to thank World Trade Week, the Los Angeles Area Chamber of Commerce, International Trade Educations Programs, the LA Air Cargo Association, Customs and Border Protection, Delta Air Lines, and every single person who came together to make this special event happen for these students.” 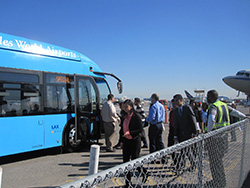 Following a light breakfast and remarks from the LACOC and LAWA, students were taken on airfield buses to view Delta Air Lines’ cargo loading operations and infrastructure. Other students began working on international trade-related scenarios, touching upon real-life problems faced by those working in logistics, customs/freight-forwarding, culturally-sensitive marketing, intellectual property rights, and finance. Upon their return, all students were provided with lunch and gift bags, courtesy of LAWA.

World Trade Week is an initiative by the Los Angeles Area Chamber of Commerce (LACOC) meant to educate and raise awareness to the importance of international trade among the general public. ITEP is one of the region’s the premier regional career-focused youth development organization in Southern California dedicated to engaging and training economically disadvantaged students for careers in international-trade.

LAX is the fourth busiest airport in the world, second in the United States, and was named one of Skytrax’ 2017 Top 10 Most Improved Airports. LAX served more than84 million passengers in 2017. LAX offers 737 daily nonstop flights to 100 cities in the U.S. and 1,386 weekly nonstop flights to 88 cities in 44 countries on 73 commercial air carriers. LAX ranks 14th in the world and fifth in the U.S. in air cargo tonnage processed, with more than 2.2 million tons of air cargo valued at over $101.4 billion. LAX handled 697,138 operations (landings and takeoffs) in 2016.

Flight Path Museum and Learning Center is a nonprofit, community-based museum honoring aviation pioneers, showcasing the importance of Southern California and LAX to the aviation and aerospace industry as well as encouraging youth to pursue education and careers in aviation-related fields. The Flight Path Museum gallery exhibits are filled with memories of aviation’s golden years and houses one of largest collection of vintage flight attendant uniforms in the Western United States.Flight Path Museum is located on the LAX runway at 6661 West Imperial Highway, open Tuesday through Saturday, 10 am to 3 pm, admission and parking are always free.