LAX to Temporarily Close Runway on South Side of Airport for Rehabilitation Work, Lighting Improvements 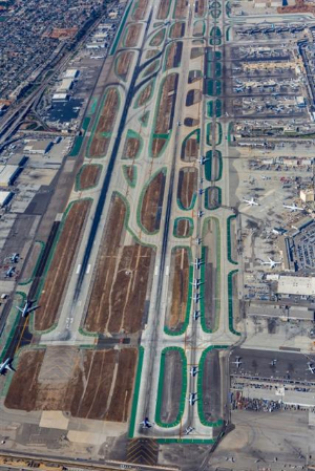 (Los Angeles, CA) Los Angeles World Airports (LAWA) announced today that Runway 7L/25R, located on the south side of Los Angeles International Airport (LAX) will be closed for approximately four months for a reconstruction project. The closure will begin on Saturday, January 20, at 1:30 a.m., and is expected to last until mid-May.

“This is important work that needs to be completed to extend the long-term life of the runway,” said LAWA Deputy Executive Director for Operations and Emergency Management Keith Wilschetz. “This runway closure phase was coordinated with our airline partners and the Federal Aviation Administration to occur after the peak holiday travel season and before the summer peak to mitigate operational impacts to the travelling public.”

The $49.9 million project involves rehabilitating the center section of Runway 7L/25R, called the “keel” section. Additional work includes new centerline LED lighting and other related specialty items. The work was originally planned as part of the closure of Runway 7L/25R last winter, but because of poor weather and the need to reopen the runway for the busy summer travel season it was rescheduled for 2018. During the closure, passengers may experience flight delays similar to those that occur during bad weather. Communities around LAX may also periodically experience increased noise as air traffic patterns shift. When conditions permit, LAX will continue its normal Over-Ocean Operations between midnight and 6:30 a.m. during the runway closure to minimize aircraft noise.

LAX is the fourth busiest airport in the world, second in the United States, and was named one of Skytrax’ 2017 Top 10 Most Improved Airports. LAX served more than 80.9 million passengers in 2016. LAX offers 737 daily nonstop flights to 100 cities in the U.S. and 1,386 weekly nonstop flights to 88 cities in 44 countries on 73 commercial air carriers. LAX ranks 14th in the world and fifth in the U.S. in air cargo tonnage processed, with more than 2.2 million tons of air cargo valued at over $101.4 billion. LAX handled 697,138 operations (landings and takeoffs) in 2016.

For more information about LAX, please visit www.flyLAX.com or follow on Twitter @flyLAXAirport, on Facebook at www.facebook.com/LAInternationalAirport,  and on YouTube at www.YouTube.com/laxairport1. Information about LAX’s ongoing multi-billion-dollar LAX Modernization Program, as well as tips and shortcuts to help navigate LAX during construction, are available at www.LAXisHappening.com.