Your Body is a Space That Sees

In Your Body is a Space That Sees, Los Angeles artist Lia Halloran combines ink and light to celebrate women’s contributions to science. Her large-scale cyanotypes recall telescopic views of the night sky, captured in photographic emulsion on glass plates in the late 19th and early 20th centuries, and used by a group of female astronomers to make extraordinary discoveries about the universe.


Halloran begins each piece by painting her impression of an astronomical image, in ink the color of midnight, on a sheet of transparent drafting film. Three of the works you see to the right of the display case are original ink-on-film renderings of this kind. But such a painting can also serve as a negative: When overlaid on chemically treated paper and left outdoors to absorb the California sunshine, the painted negative produces a blue-hued cyanotype print of the same vision. Time figures importantly in these artworks. All astronomical imagery offers a look back in time, to the moment when light left the object under study. Although the human eye registers only the impression of a moment, an artist or a photographic plate can collect light over a period of hours and present a composite view of entities too faint for the eye to register at a glance. The turn-of-the-century photographic negatives that Halloran examined were made by long exposure to starlight falling through telescopes onto glass plates coated with photographic emulsion. Halloran’s cyanotypes emerge through exposure to the light of the nearest star, our Sun.

Although sunlight and starlight contain all colors, the iron salts employed in the cyanotype process respond only to ultraviolet light, which turns them Prussian blue. The titles of these works acknowledge the individual women who drew new truths from close study of the glass plates. For example, one of them determined that stars consist mainly of hydrogen and helium, while another divined a means for measuring distances across deep space. More information about them is available in the display case to your left, where you can also see a replica of a glass plate from 1897. The silver-colored background in the display case is reminiscent of the silver compounds that give photographic film its sensitivity to light.

Lia Halloran is an artist who often incorporates science and nature to create projects that draw from scientific materials, historical influences, and identities. She has participated in a wide range of interdisciplinary collaborations with scientists and architects in various national and international exhibitions and publications.

Development of Your Body is a Space That Sees was supported by an Art Works grant from the National Endowment for the Arts. The artist is represented by Luis De Jesus Los Angeles, where this series was first shown. It has since traveled to solo exhibitions at the Lux Art Institute in San Diego, the Schneider Museum of Art in Ashland, Oregon, and the University of Maryland Art Gallery, College Park. Lia Halloran is Associate Professor of Art at Chapman University in Orange, California, where she also teaches courses that explore the intersection of art and science.


Exhibition text by Dava Sobel, author of Longitude, Galileo’s Daughter, and the book The Glass Universe which tells the hidden history of the women whose contributions to the burgeoning field of astronomy forever changed our understanding of the stars and our place in the universe. You can see more at: www.liahalloran.com or on Instagram @liahalloranstudio. 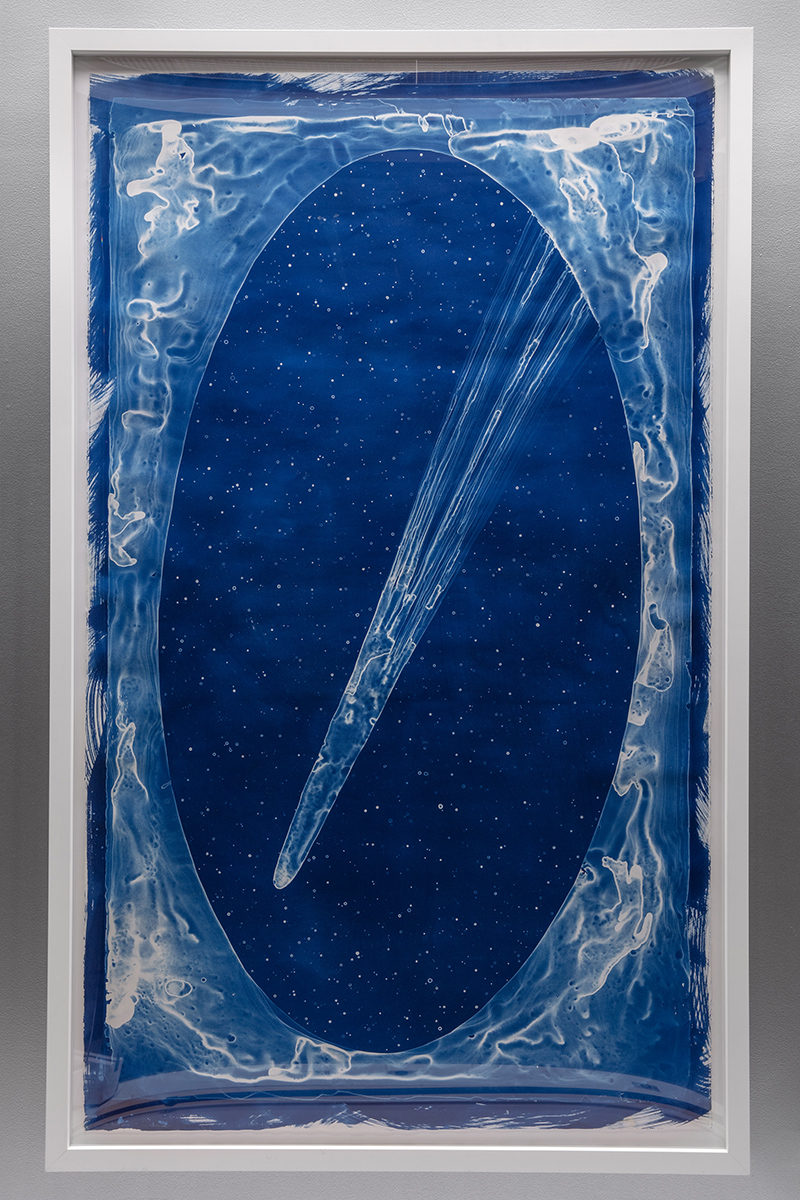 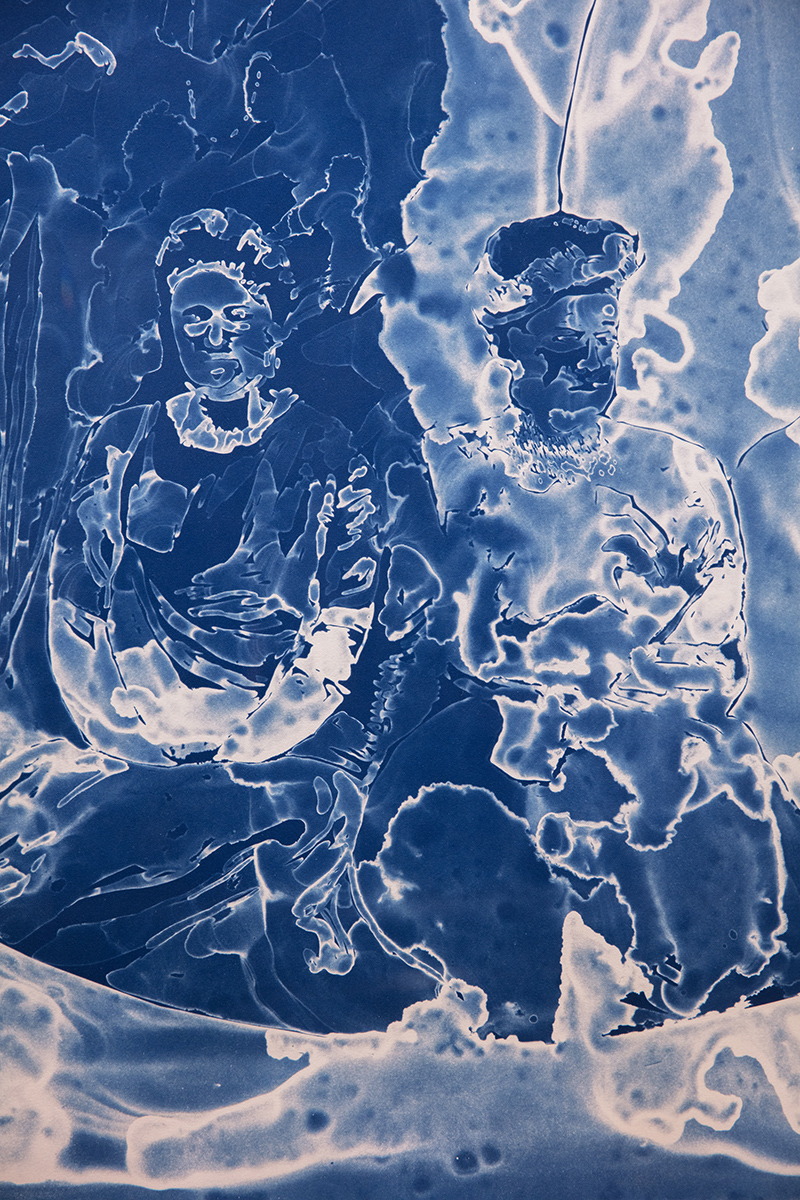 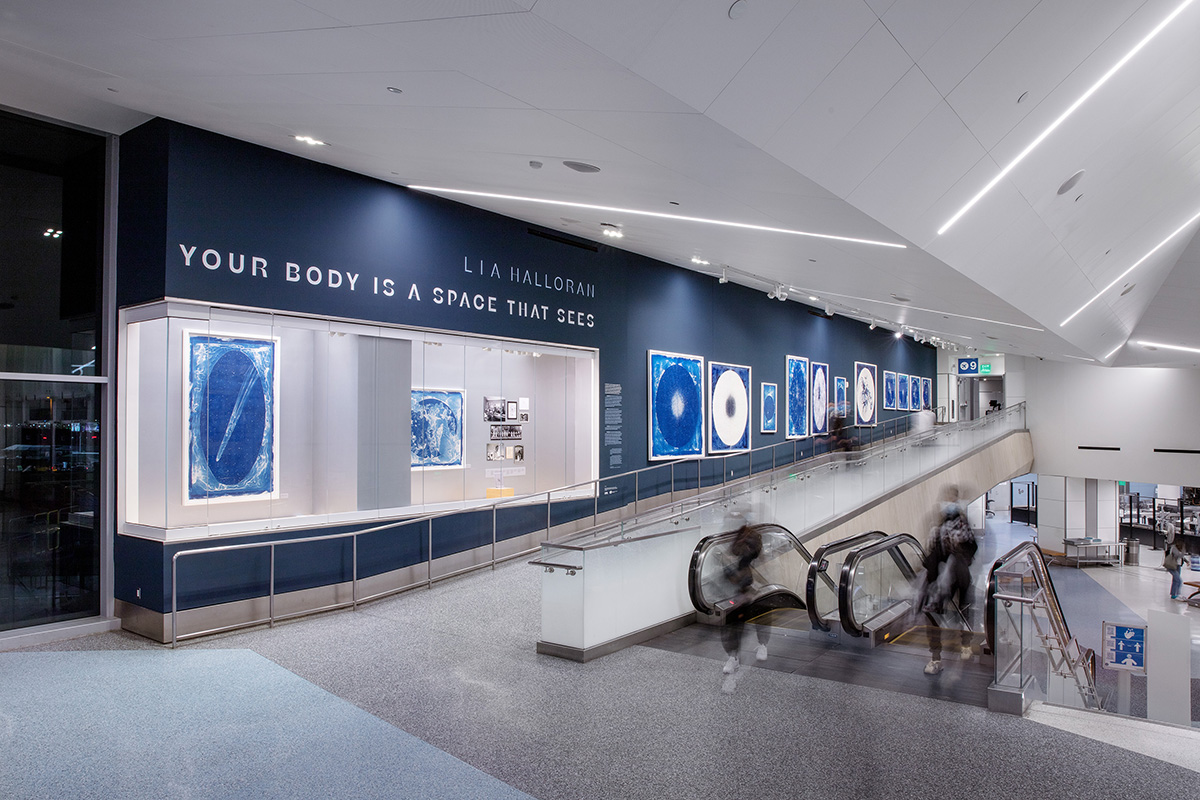 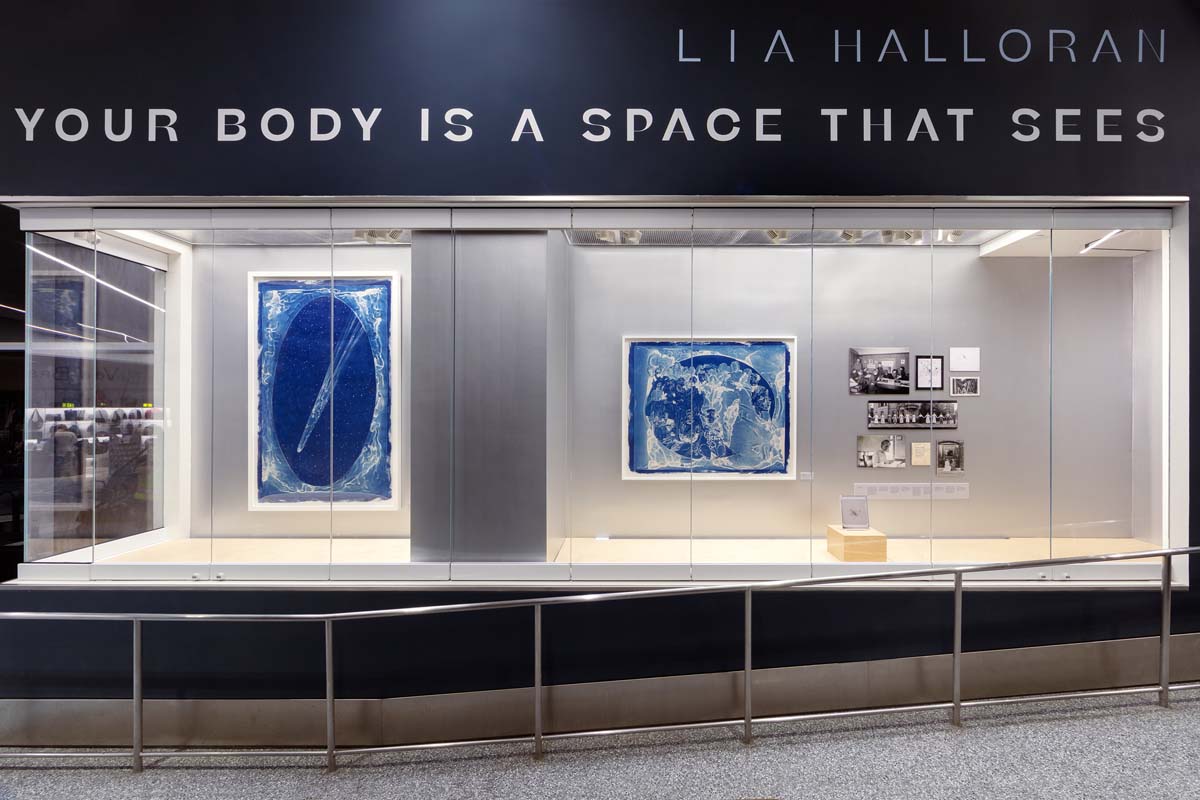 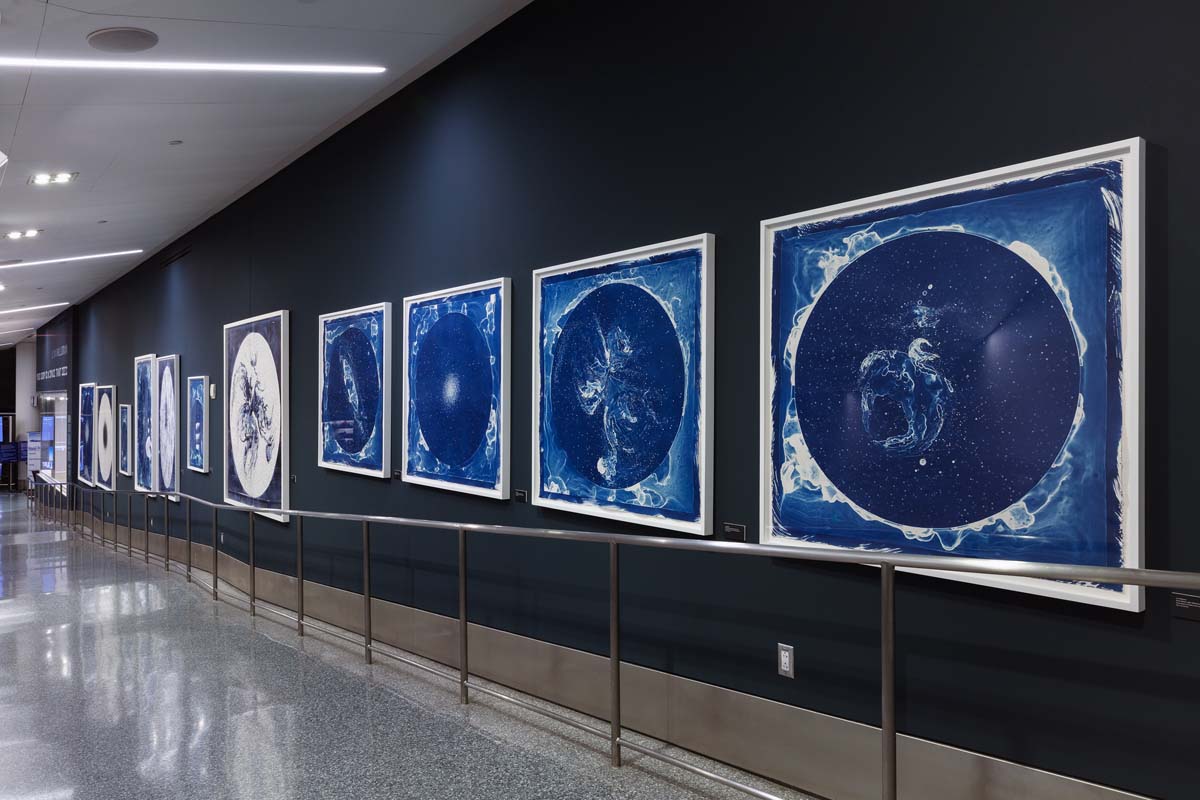 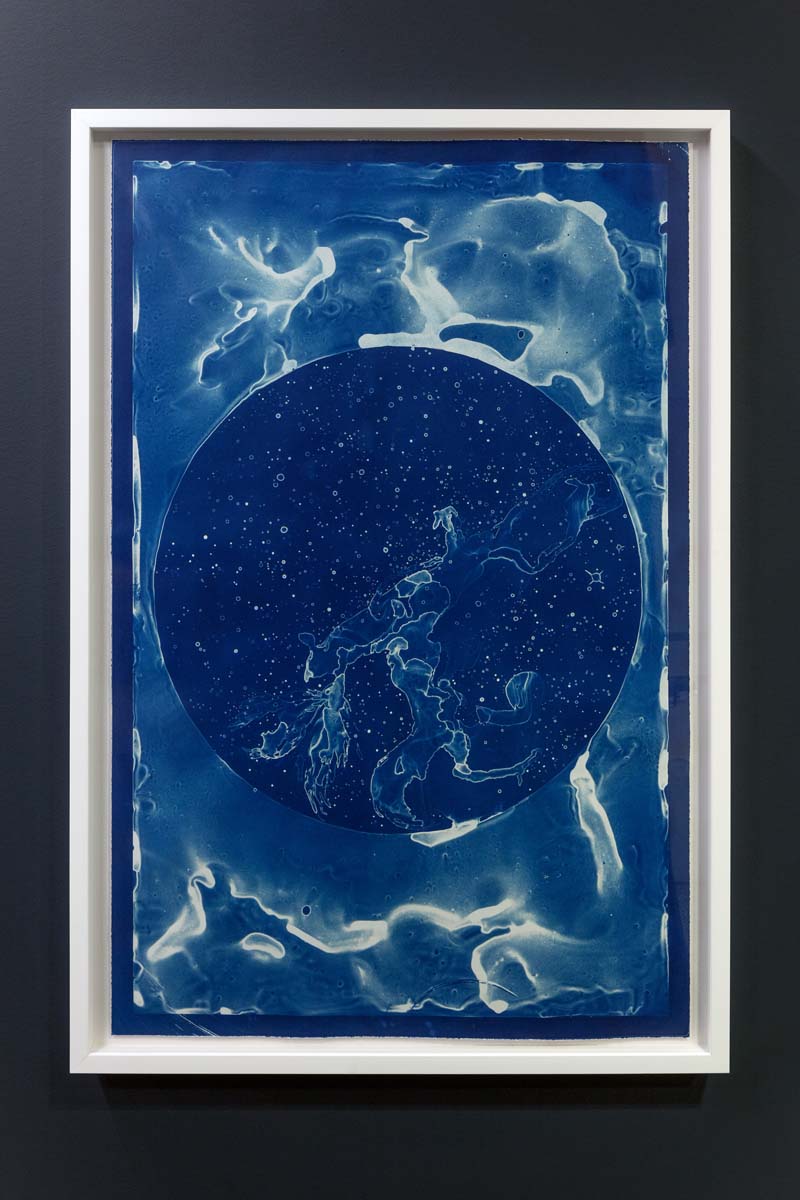 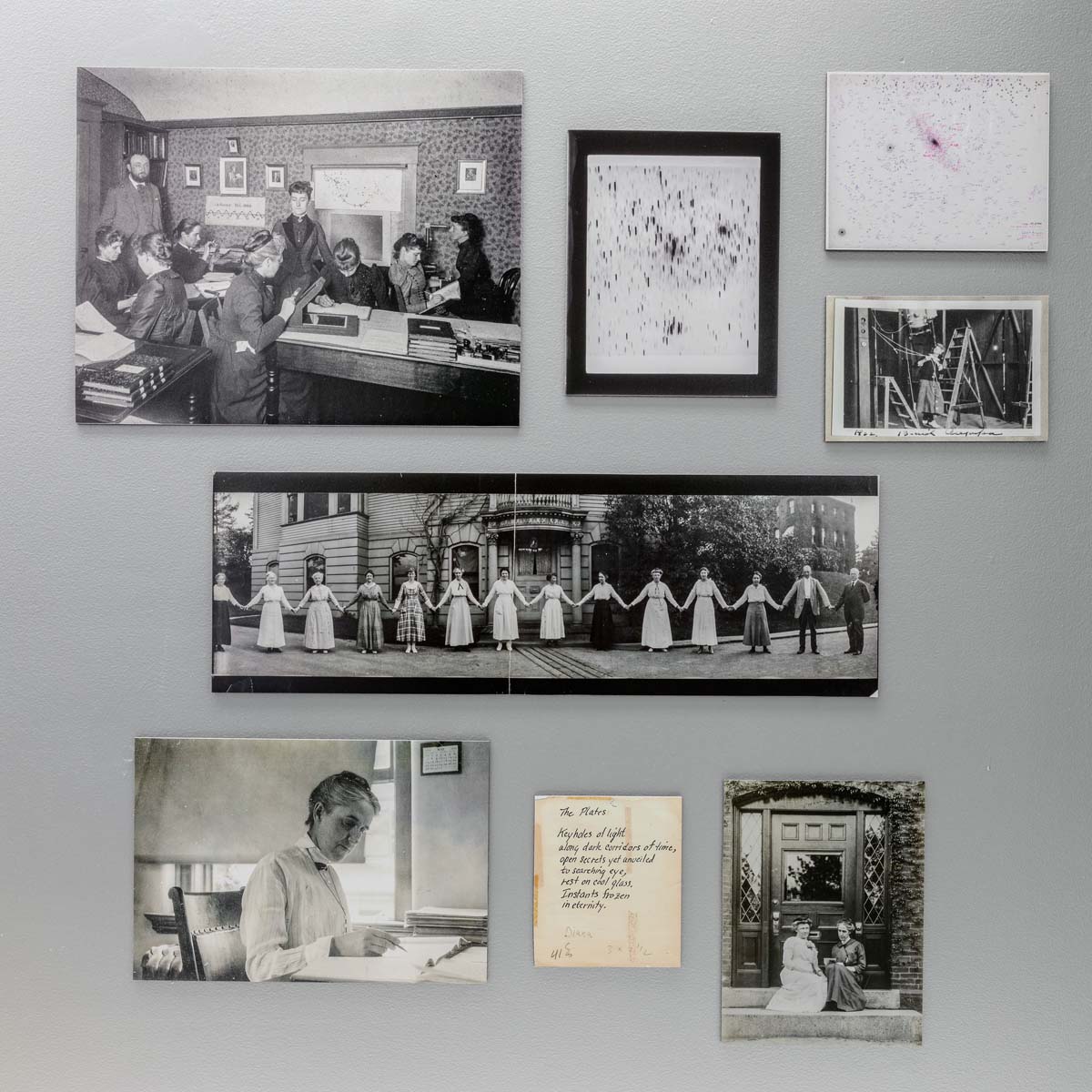 Lia Halloran, Your Body is a Space That Sees, installation view. (left to right, top to bottom)

Director Edward Pickering, far left, delegated the supervision of the Harvard Observatory’s female computers to Williamina Fleming, shown standing at center. A prodigious worker herself, Mrs. Fleming helped establish a classification system for the stars and made numerous discoveries from her own studious examinations of the hundreds of thousands of glass plates entrusted to her care. (1891)

Each streak in this image represents the spectrum of a star—the visual data from which the Harvard women built a stellar classification system that is still in use today. (1893)

Annotations in various colors of ink on this photographic negative distinguish previously observed nebulae from newly discovered ones, and also single out, in green, distinctive groupings of stars known as globular clusters. The large object bearing many red marks is the Andromeda Galaxy.

Annie Jump Cannon, the first of Harvard’s female employees to make her own telescope observations, did a brief tour of duty at the Southern Hemisphere station in Arequipa, Peru. (1922)

From her desk at the Harvard Observatory, Henrietta Swan Leavitt discovered some two thousand stars of variable brightness. Her assessment of their cyclical behavior enabled the first distance measurements across deep space, including the dimensions of the Milky Way Galaxy and the two million light years separating the Milky Way from the Andromeda Galaxy.

An unidentified poet on the observatory staff penned this paean to the glass plates. It is still pinned to a bulletin board near where the plates are stored.

Miss Cannon, left, was an elected officer of the American Astronomical Society and an honorary member of the Royal Astronomical Society. Although Miss Leavitt, right, died 100 years ago, her  period-luminosity relation was recently renamed the Leavitt Law to reflect its fundamental importance for astronomy. 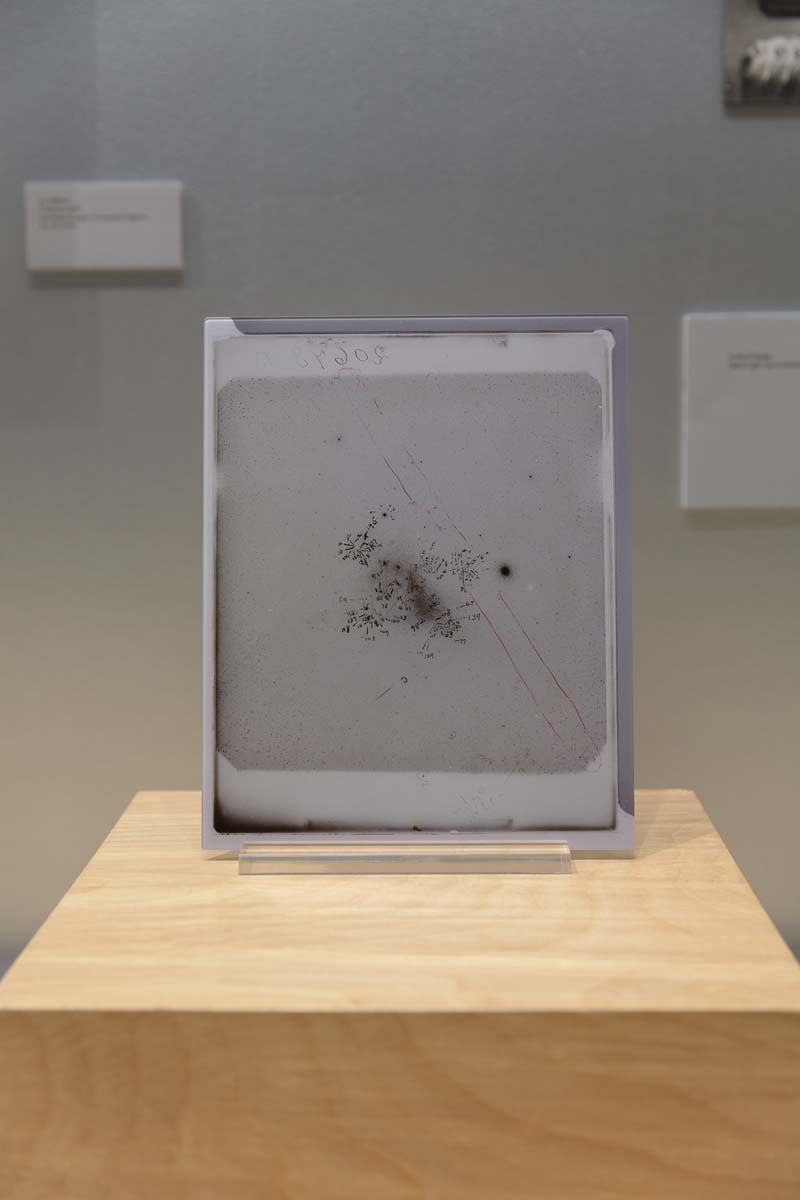 Lia Halloran, Your Body is a Space That Sees, installation view. 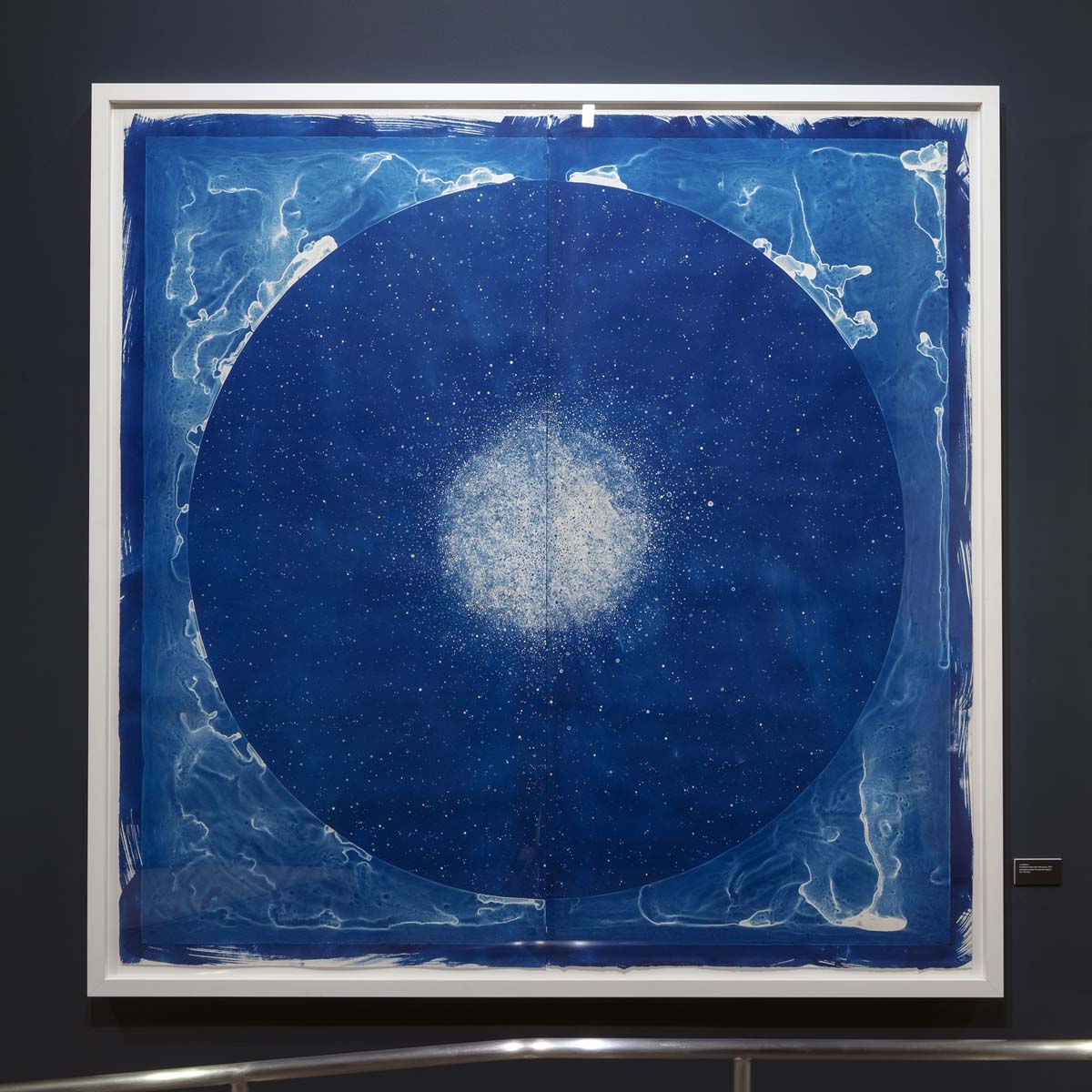 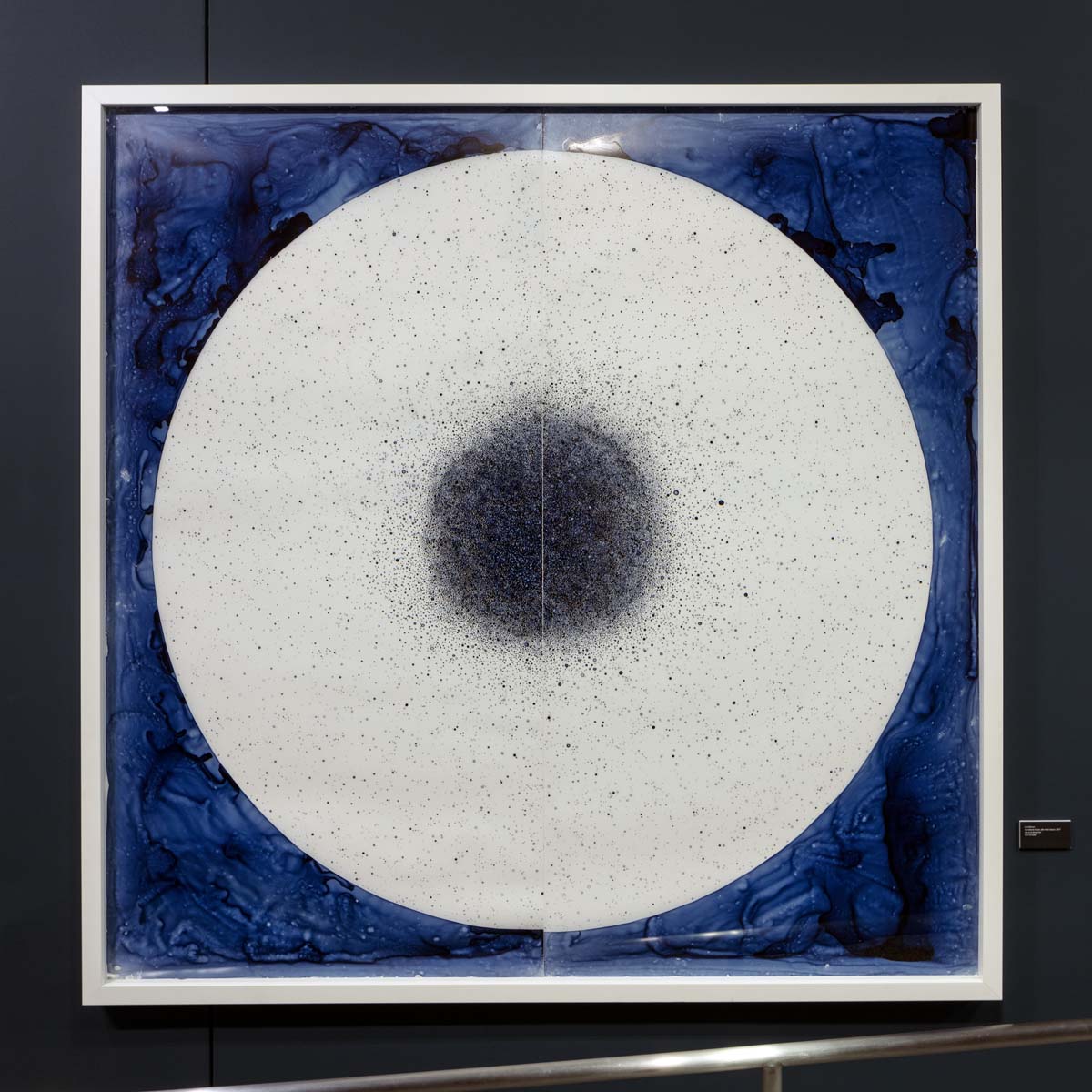 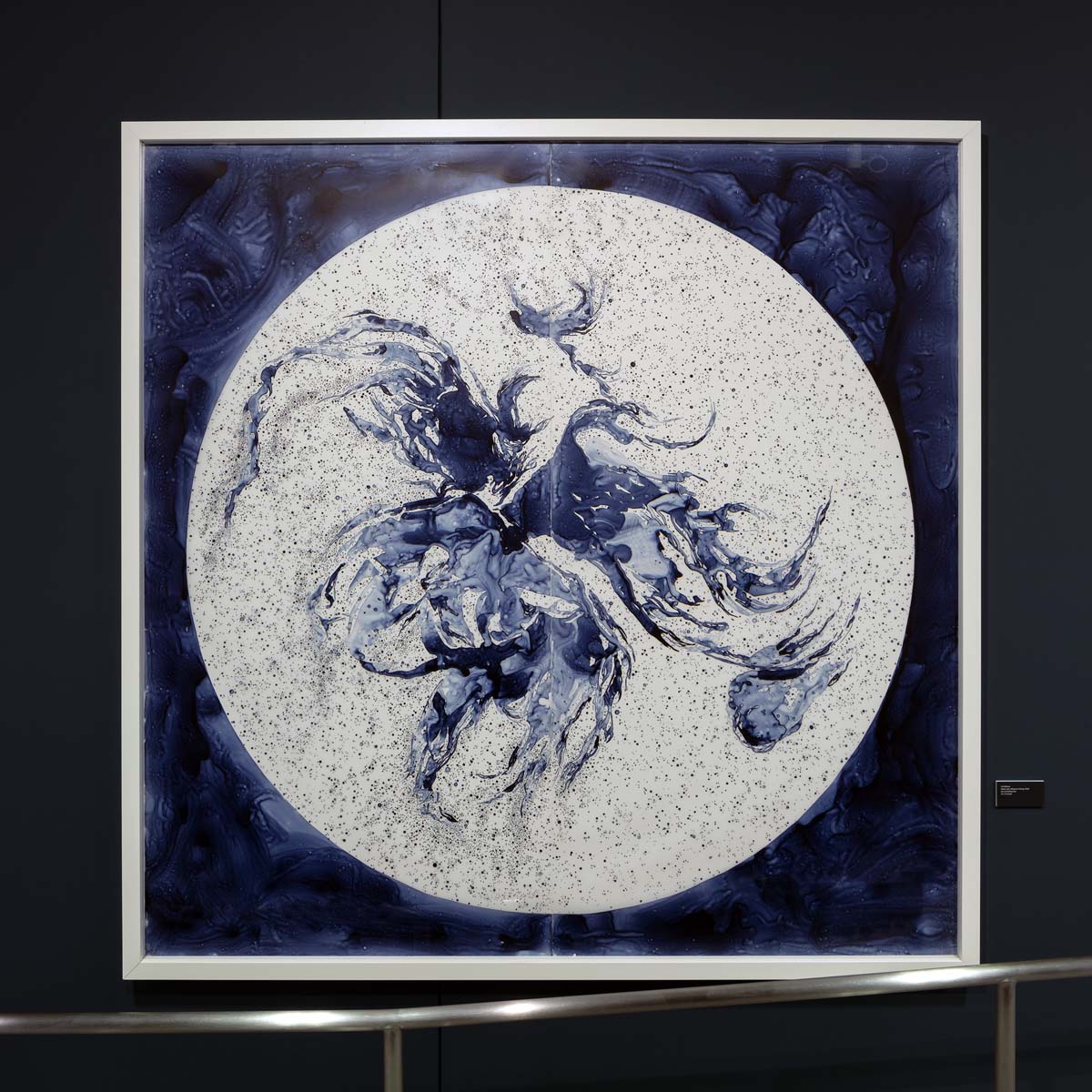 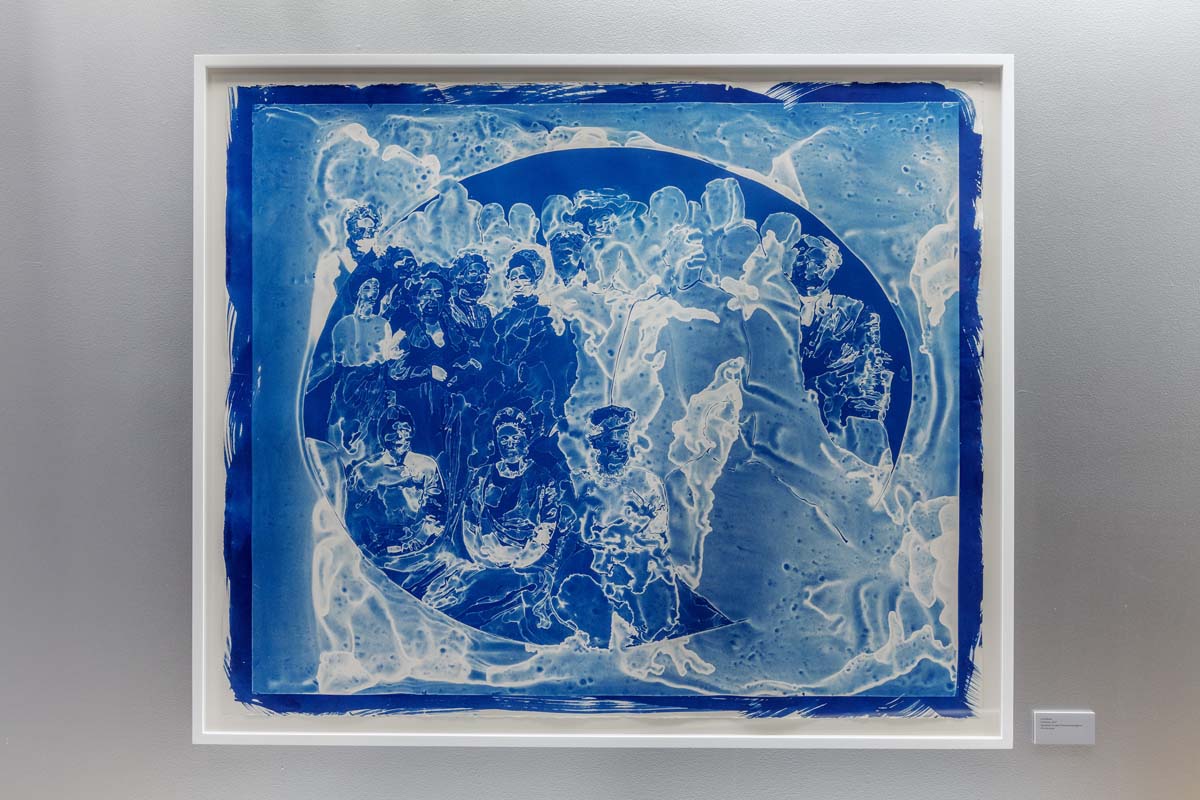